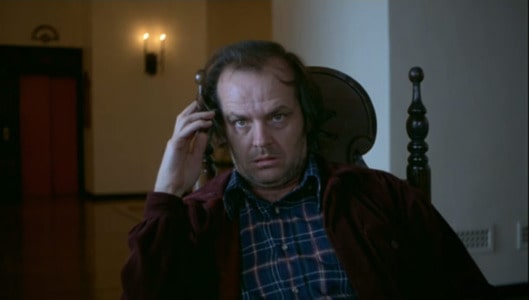 Jack Nicholson is clearly one of the better actors in the last 100 years and it’s tough to mention great acting performances without bringing his name up at least once. What amazes me is that Nicholson has been doing this for over 50 years, and successfully no less. His resume is top notch and it’s rare to see him in a dud film. And while the man keeps pressing on and looking slick at Laker games, I can’t help but to appreciate the massive amount of work he’s done in Hollywood.

I mean come on guys. Who can ever forget this scene? You really believe how insane he is in The Shining. I’d say it’s in his top 5 best performances. I absolutely love when he starts cursing in this flick. It’s at that point you know some strange things are gonna go down.

Taking a Swig in Easy Rider

People forget how awesome Nicholson was in Easy Rider. He was the comedy relief for about 20 minutes of the film. Just a free talking, free living kid. Love it.

I never even knew about this movie before seeing this clip. What an amazing scene. I love how calm his voice is right up until the last 10 seconds.

You can’t Handle the Truth – A Few Good Men

I loved him in this movie. Such a prick. Such a negative guy. And yet whenever he says something positive it absolutely blows you away. Nicholson nailed this role.

You’re not crazy – One Flew over the Cuckoos Nest

This movie was amazing by the way. His war with Louise Fletcher has got to go down as one of the better rivalries in film. He tries to outdo her here. And successfully I might add. Look at Danny Devito!

Jacuzzi Scene in About Schmidt

This is one of his better non talking scenes. Bates does plenty in this scene.

Can’t leave out a movie for which he won an Oscar. And his womanizing character in this movie is great. Yeah it’s a chick flick but still, he was awesome.

Who is She? – Chinatown

Man does he know how to slap. Incredible