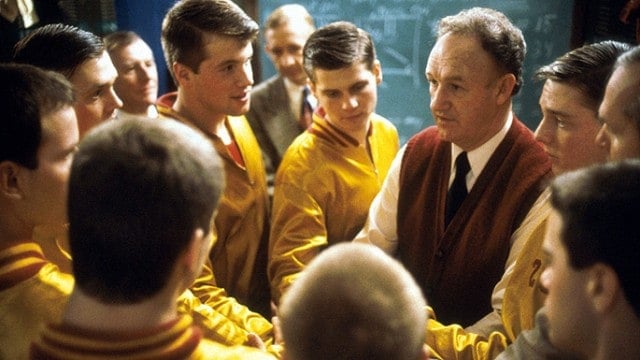 It’s that final moment, the last few seconds, one of the most defining moments in any athlete’s life that lets them know just what it means to be under pressure. These are the moments in which an athlete shows what they are really made of and how hard they are willing to push to make sure that they’re the ones that come out on top. The entire game or match can be played at a dead sprint, but those last few seconds are where everything needs to be put on the table, and nothing can be held back.

Here are some final moments in film that show just what that means.

It takes a lot for a new coach and their players to trust one another. It’s almost impossible to do in one season, but maybe if more coaches were like Gene Hackman it would be possible. Otherwise this kind of turnaround is very hard to do when coaches and players are getting used to one another.

This is the kind of moment that a lot of pitchers dream of. Winning the big game is of the utmost importance, but helping to drag your team out of mediocrity is even more so.

It’s better to fade out as a legend than fizzle out as a has-been or never-was. A lot of athletes would rather exit the game on their terms, and that’s usually the most inspiring story of all.

Sometimes you’ve got to be tough to make it to the end of the round. Other times it helps to have something to prove so that you won’t just give up and go down when your body is aching and your eyes just want to close. Rocky is the epitome of what it means to be tough and determined.

Giving up isn’t in the cards when you’ve got something to fight for. The pride of your team, the town you live in, or just your own stubborn, mule-headed sense of determination can be more than enough.

It’s important to finish what you start. For a team that did nothing and went nowhere until Gordon Bombay found them and rediscovered his love for the game, the Ducks showed that with real grit and determination that anyone can come out on top.

Most athletes won’t ever get a second chance. Those that do often don’t do much of anything other than flop when they come back. The Replacements shows that those who do have talent can still make a decidedly huge impact on a game that some have almost given up on.

Size doesn’t always matter in any contest. Even if you’re outmatched, even if you’re stomped into the ground, it’s the willingness to get back up and do it again that counts. Heart is essential to any sport.

How do you want to be remembered? As the guy that came and went without doing anything? Or the guy that came in and showed his team how to win? Most athletes are in it for themselves, but the truly good ones are there for the team.

There is no such thing as the wrong color on the court. You can either play or you can’t. Being the biggest, loudest person on the court only goes so far unless you can back it up.

The rest of the game can be measured in minutes, but the most important part is measured in the final few seconds. That’s where the real winning is done.