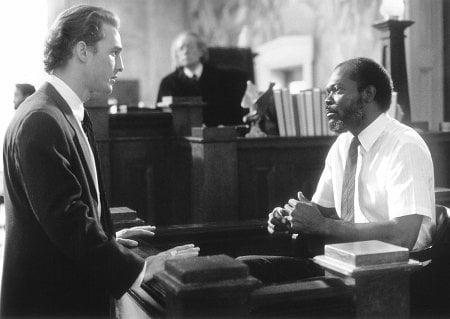 I feel like movies today don’t tackle racism in quite the same way they used to.Â  While the subject is still brought up, and often I might add, the world has changed.Â  It’s more PC and cinema is way more careful than it used to be. Â  In fact many movies today have more of a “racial undertone” type of approach.Â  And sometimes it doesn’t even take the form of race against race.Â  It can be species versus other species.Â  Take Avatar for example.Â  Many people argue that Avatar has some racism in it (which I totally agree with).

And overall, while the topic of racism is still somewhat popular in movies and television that doesn’t mean it’s always successful.Â  My point being, some movies put in racism just to get an effect.Â  Whereas others base their entire movies around racism. The following are ten movies where racism is a central theme and I think the movies used it quite well.

A Time To Kill

Talk about an appropriate title huh?Â  If there’s ever a time to kill it’s certainly when your daughter is raped and murdered.Â  Black or white it sure as hell wouldn’t make a difference to me.Â  If someone were to do that to my daughter I wouldn’t hesitate, not even for a second.Â  P.S. Whatever happened to Matthew Mcconaughey?Â  He was amazing in this movie.Â  Now it’s like show off your abs in stupid chick flicks.Â  This movie was extremely powerful and very “real” if you know what I mean.Â  Sadly, this kind of racism still takes place in some parts of the South.

To Kill a Mockingbird

You have to appreciate the tackle on racism here.Â  It was extremely bold to go after both the subjects of rape and racism in 1962.Â  And Gregory Peck couldn’t have done a better job as Atticus Finch.Â  It’s certainly a must see.

Two FBI agents investigating the murder of civil rights workers during the 60s seek to breach the conspiracy of silence in a small Southern town where segregation divides black and white.Â  Hackman and Defoe do an excellent job here and when a movie has scenes that are tough to watch, you know it’s good.

Do the Right Thing

It doesn’t get any more “racist” than Do the Right Thing.Â  Spike Lee pulls out zero stops when it comes to stereotyping.Â  He goes after the Italians, Blacks, Asians, and just about anyone in this movie.Â  He also does it in a comedic way. Â  I absolutely love the montage where each race makes fun of the other, especially the Asian guy when he says “Mayor Koch, how I am doing!”

Perhaps Edward Norton’s best role of his career is in this movie.Â  His character Daniel Vinyard realizes how ignorant and dumb he’s been as a young White Supremacist leader in Los Angeles.Â  How does he realize his wrongdoing?Â  By committing murder and having his own kind turn on him in prison.Â  The rape scene is very tough to watch, as is the scene where he “curbs” the guy.Â  Great great movie though.