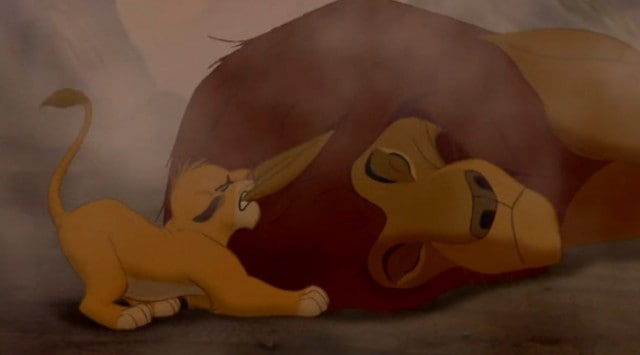 It doesn’t happen very often, but there are a surprising number of scenes in movies that can actually make guys cry. This is opposed to most females, who I’ve found start bawling every time anyone kisses in the rain during a movie. What do you mean I’m generalizing?

In any case, these ten scenes will at least bring a hint of a tear to even the manliest of men, and ladies, if your man doesn’t look mildly affected by any of these, you’re either dating a robot or a serial killer. At times I was even choking up watching the scenes to put this thing together as they’re that good, even out of context. Check them out below, and keep in mind that this is clearly going to be SPOILER HEAVY for the movies mentioned.

I think one of the reasons the beginning of Up is so touching is that it comes out of completely nowhere, seeing as most guys think they’re about to see a movie about some old dude who sails around the world in a balloon house. But we should have known that Pixar is more than just a bunch of flashy colors, and without a doubt, the death of Carl’s wife is the saddest moment found in any of their films.

Many people would point to Jenny’s death as the tear-jerking moment in Forrest Gump, but while yes, that was emotional, I think it’s when Forrest first meets his son that really hits home. It also helps that it’s the insanely adorable Haley Joel Osment before he grew up to be an awkward teenager.

There are a lot of “manly hero death” moments in movies. There’s Bruce Willis in Armageddon, William Wallace in Braveheart, but I think Maximus’ final battle in Gladiatior stands above the rest, thanks in part to the fact that we get to actually see him reunited with his family in the afterlife after they’d been cooked and raped by the Romans earlier. Fun fact: There was actually a Gladiator 2 script where Maximus comes back from the afterlife to conquer.Â  Seriously.

No one died here, but the moment where everyone, including the new king and queen bow to the lowly band of Hobbits due to their extreme bravery walking across the world to destroy Sauron made many a geek shed a tear at the end of Return to the King. And that’s when the movie should have ended, not half an hour later.

Most people will want to feel like bawling throughout Schindler’s List, but the most impactful moment of all is when we see the adorable little Jewish girl’s body in a wheelbarrow full of corpses. Even though we only briefly saw her earlier in the film, by giving her a red coat in a world of black and white, it’s clear Spielberg wanted this to hit home with us.

I know not many people have seen The Iron Giant, but those of you who have will have to admit that at the end when he sacrifices himself to save the town, and thinks of himself as Superman moments before detonation, it’s an expectedly incredibly touching sequence. Yeah, alright so the movie cops out and he actually lives, but at the time, crazy sadness.

Didn’t think I could make it through this list without mentioning Rudy? Even if you hate most sports like myself, there is no denying just how inspirational Rudy’s sack is at the end of this movie, and it’s even more so because it’s all a very true story. It teaches that through hard work, you can become shittiest player on a shit football team. Sorry, I went to Michigan, I have to hate Notre Dame, but yeah, good moment anyways.

This one gets me perhaps more than almost any other on this list. Everything, from Tom Hank’s death, to Damon’s transformation into the old man, to that quote, the scene was designed to produce tears. It’s physically impossible to avoid it.

This one had me almost choking up as I watched the two minute clip in order to take that still frame. I’m pretty sure I cried for a week when I was eight and saw this originally, but it doesn’t really get any less tragic as you get older.

For those of you not sure what you’re seeing here, it’s Guido’s son watching him through a box he’s hiding in as the Nazi’s are about to execute his captured father. But keeping up the charade he had going for his son’s benefit, Guido goosesteps past the boy, making him chuckle one last time before he rounds the corner and is shot in the head. And that my friends, is what you call heartbreaking.

Now as always, feel free to add your own.