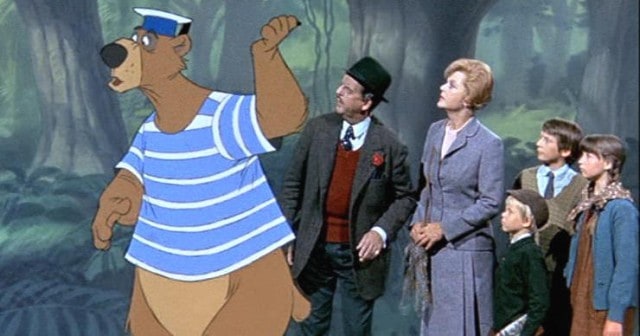 I remember watching this movie when I was a kid, and I’d want to see only the soccer game scene. There’s something inherently fun about anthropomorphic animals playing human sports while still retaining their animal characteristics. I really couldn’t tell you much else about this movie, as it’s been years since I’ve seen it. I do remember the soccer match quite well, though, and the mixing of live action and animation definitely left an impression.

I wouldn’t go so far as to call the mixing of live action and animation in Who Framed Roger Rabbit “revolutionary,” but at the time, it was the most advanced combination anyone had ever seen. Real life objects would be “held” and “carried” by the animated characters, giving a heightened sense of realism to the film. But of course, toons are toons, as seen in the clip above.

Looney Toons interacting with real life actors (and athletes) is nothing new, and Warner Bros. promoted not only its animated characters in this movie, but the idea of Michael Jordan as anything other than a gambling-addicted, narcissistic, deadbeat dad, as well. Well played, Warner Bros., but you’re not fooling me.

Apparently, director Ralph Bakshi has carved himself a nice animation niche. His most popular feature is Cool World, a bizarre movie that starred Kim Basinger, Gabriel Byrne, and a pre-mega star Brad Pitt. Despite featuring hand-drawn animation, the content and characters of Cool World were pretty dark and definitely not for children. I seem to recall a urinating baby gorilla or something at some point.

In Pete’s Dragon, all the characters are real life actors except Elliott. Which makes sense, as there are no real life dragons. Well, at least not the kind found in this Disney movie. What could Elliott do besides turn invisible? It’s not like his saliva contained harmful bacteria that resulted in lethal bites.

The 1945 film Anchors Aweight – a reference to the song of the same name associated with the United States Navy – is perhaps most famous for a scene in which Gene Kelly dances with Jerry Mouse (of Tom and Jerry fame). For those of you who aren’t familiar with this scene (and based on the release date of Anchors Aweigh, I’m guessing it’s most of you), you can see the original clip side-by-side with the more recent Family Guy parody clip.

Song of the South

This scene features Dick Van Dyke dancing like a total moron with a group of penguins. Julie Andrews seems to be impressed, and perhaps even turned on a little bit. I can tell you from experience, though, that dancing like this does *not* get you laid. Not by women, at least.

OK, so I know that there is just a brief moment of live action and animation combined during the same scene (the little bird that flies around Audrey), but Little Shop of Horrors is a great, great musical and because I can, I’m including it. Family Guy spoofed this clip, also – and it was pretty funny – but I still prefer the Ellen Greene version. Greene played the part of Audrey for the Broadway show, too, so whoever is replacing her in the remake (ugh) has some very large shoes to fill.

I love that David Hasselhoff doesn’t take himself too seriously and isn’t above making a cameo like this. Good work, Hoff.