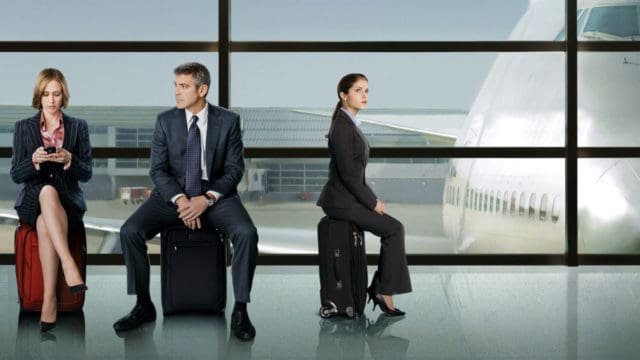 Up in the Air proves that a life spent continually on the move seems like a life spent in the wind. For Ryan however it’s a life that he chose and one he has stood by for a long time, and has no desire to give up. When a young recruit is hired on at his firm his lifestyle choices begin to make less and less sense to him as the days go by. When he is asked to convince his sister’s husband to marry her, Ryan is finally forced to really look at what attachment means and how it can possibly something that isn’t worth running away from any longer. The only downside is that the attachment he wants isn’t possible since for someone else, he has been the escape from their attachment and realizes his life has little to no meaning.

Even a life on the go must stop on occasion and look at the world that surrounds it.Â  Here are 10 things you didn’t know about the movie “Up in the Air.”

10. Some of the fired people are not actors.

The director decided to use real people to get real emotions. You can tell who the actors are and who the real people are since the latter have no interaction at all with Clooney and Kendrick, as the director thought this would freak them out.

9. The Concierge key is thought to be more of a rumor.

It’s very real but it’s also very rare since it’s by invite only and is given out to a select few customers that are considered favored passengers.

8. Clooney’s wardrobe for the movie fits into one suitcase.

That definitely suits the idea of his character and fits in with the backpack speech he gives throughout the movie.

Two other films came up that the director wanted to work on first so he put this film on the back burner and came back to it about a decade later.

6. Vera Farmiga used a body double for her nude scene.

She had no trouble being nude, but she’d given birth not long before and figured that breast milk running down her body wouldn’t be a desired visual.

5. Steve Martin was the next choice if Clooney had refused.

Despite being a dramatic comedy it would have been something akin to Lost in Translation had Martin gotten the role.

There is some preferential treatment to be had but there isn’t as big of a fuss as was seen in the movie.

3. It was released under different titles in different countries.

In Russia it was released under the title of I Wish I Could Rise to the Sky. Up In the Air doesn’t seem to translate too well.

2. Anna Kendrick’s wardrobe was rented for her.

She was financially insecure at the time and felt kind of bad about it.

1. The backpack speech was taken from a point in the director’s life.Â

The director and his wife had to evacuate their home after a fire in their neighborhood and came up with the speech not long after.

If you never stop and look around you might miss out on what you’re leaving behind.