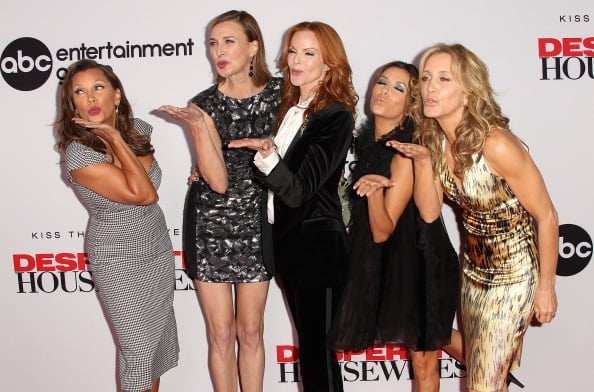 It has been almost three years sinceÂ Desperate HousewivesÂ ended its awesome eight-season run on ABC. The series premiered in October 2004 to critical acclaim and a huge fan base, and it ended in May of 2012 after its characters went through countless affairs, death, marriages, and girl talk over many poker games. Over the years, fans have most likely heard many facts about the series, like how Courteney Cox was considered for the role of Susan Meyer, or that series creator Marc Cherry based the character of Bree Van de Kamp off of his own mother. Here is a list of ten interesting facts that you may not have heard about Desperate Housewives, aÂ series that helped make ABC a network to watch once again.

1. James Denton and Mike Delfino are the same person

Actor James Denton has admitted that he is very similar to the character Mike Delfino, who he portrayed for eight seasons onÂ Desperate Housewives.Â In an interview with VH1, the actor explained, “[Mike]Â was a real blue-collar guy with a dog and a pick-up truck and that’s me exactly. I’m always building something, working on something around the house. So aside from the painkiller addiction and cop killing thing, we’re pretty much alike.”

Doug Savant played the character of Tom Scavo for the entire eight-season run ofÂ Desperate Housewives.Â During the first season, he was only a recurring character as Tom was away on business a lot. During early developments of the series, it was originally planned for Tom to cheat on Lynette during the first season. However, that idea was scrapped because the writers wanted to have one “happy” couple on Wisteria Lane since Gaby cheats on Carlos, Rex cheats on Bree, and Susan is single and alone.

Wisteria Lane is located on a back lot at Universal Studio in California. This is also where the entire series is shot. The street is known as Colonial Street and was constructed way back in 1946. It has been used on series likeÂ Leave it to BeaverÂ andÂ The Munsters. Desperate HousewivesÂ was the first series that used images of the entire street at once, and the houses were refurbished to give them a more modern look when used for the show.

The 2007-2008 Writers’ Strike occurred during the fourth season ofÂ Desperate Housewives.Â Because of this, the series only produced 17 episodes instead of the usual 24 episodes. Several storylines had to be scrapped due to the fact that there was not enough episodes to fit in everything. However, the storyline involving Gaby and her abusive stepfather and Danielle taking her baby back from Bree were shown later on in the series’ run.

When Kyle MacLachlan was cast on Desperate HousewivesÂ towards the end of Season 2, he was intended to be the murderer in the Season 3Â storyline. MacLachlan decided that he wanted to be with the series longer than just one season so he approached Marc Cherry and asked if the story could be altered. Cherry brought in Dixie Carter as Orson’s mother, and she is the one who killed Monique. Because of this, MacLachlan was able to stay with the series until it ended in 2012.

6. A ratings winner from the beginning

Desperate HousewivesÂ was the biggest success of the 2004-2005 television season, ranking in as the 4th most watched series. The pilot episode drew in an astonishing 21.3 million viewers. The last time a pilot episode of a series had done that well on the network was eight years prior withÂ Spin City.Â Viewership would slightly decline every season going forward, with a slight uptick during the fourth season.Â Desperate HousewivesÂ ranked as a top 20 show for its first six seasons. Season 7 would rank at #26, and the eighth and final season was the 37th most watched show of the 2011-2012 season, with an average audience of 10.6 million viewers.

It should not be a surprise to anyone that a popular show likeÂ Desperate HousewivesÂ would be the recipient of many awards and accolades. The series, as well as Teri Hatcher, were both recipients of Screen Actors Guild Awards before the end of the first season, a first for the awards. Other wins include Felicity Huffman taking home an Emmy and SAG award, Kathryn Joosten receiving an Emmy for her work as Mrs. McCluskey, and Teri Hatcher winning the Golden Globe award in 2005.

Desperate HousewivesÂ was so popular that two video games were created in the likeness of the show. The first was released as a computer game in 2006. The player is a housewife that moves to Wisteria Lane with her family trying to solve a mystery. The game features all of your favorite characters from the series, a voiceover from Mary Alice Young, and several characters only featured on the game. Later that year, a game that could be played on your cell phone was created; it closely resembled Mario Party.

Vanessa Williams spent four seasons playing Wilhelmina Slater on the ABC drama Ugly Betty.Â When the series concluded in 2010, she was still under contract with ABC for two more years. Because of this, a part was created for her on Desperate Housewives.Â Williams starred as Renee Perry for the final two seasons of the show. WhenÂ Desperate HousewivesÂ ended in 2012, Williams would stick with ABC for another seriesÂ 666 Park Avenue,Â but it was cancelled during its first season.

It has been calculated that a total of 52 people were killed during the eight seasons ofÂ Desperate Housewives.Â Many of those that perished on Wisteria Lane were show again as ghosts in the final scenes of the series finale when Susan is driving away. The season that featured the most death was Season 6,Â which featured the demise of Karl, one of Lynette’s twins she miscarried, and several unlucky women killed by the Fairview Strangler.

Do you know any other fun facts about Desperate Housewives?Â Let us know in the comments section below.