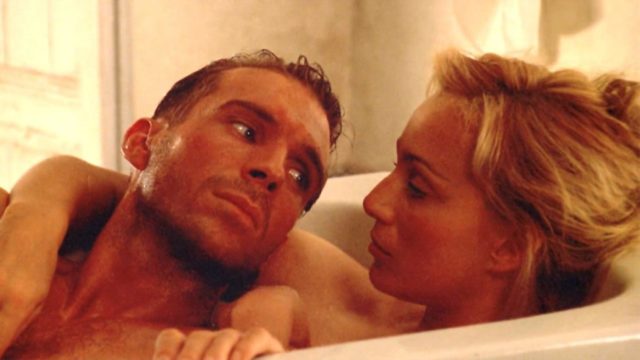 The English Patient is a love story about a man and woman who could not be together since she was already with another man. When the other man found out he attempted to crash the plane that he and his wife were flying in, a murder/suicide attempt that comes when he deduces that she was having an affair. The husband dies but the wife is badly injured, prompting her lover to leave her with provisions and seek help. In the process he is captured, escapes, and is injured before being brought to a hospital where he relays his story. Upon finishing it he asks for a lethal dose of morphine, which the nurse grants.

Sometimes the pain of living is just too much when the peace you want is denied.

10. The Germans shooting at the plane were tourists that were used as extras.

They had run out of money for extras and needed to find someone else that was willing to step in for the part.

9. The first cut was over four hours.

For a movie like this that is a long, LONG time to sit and listen to a man recount his story about an affair that turned deadly and almost killed him.

He wanted to be done in head to toe makeup even when he was only getting closeups done. Obviously he wanted it to look authentic.

7. Bruce Willis turned down a role in the movie.

He was talked out of the role of Caravaggio by his agent but later on really regretted it.

6. Apparently you can have your Oscar touched up.

One of the actors that won an Oscar for this film had to later on have it touched up because her child liked playing with it. Maybe it’s time to consider a higher shelf at that point.

5. There were twenty drafts of the screenplay.

This was a very carefully thought out film and didn’t leave much to chance.

4. A shirt worn by Fiennes in this film went for almost two thousand dollars.

It went for about $1,900 at auction. It was hopefully washed and laundered before being put up for auction.

3. Fox backed out of the film and Miramax took over.

There was a serious debate over casting and Fox eventually backed out of the deal as a result, not wanting to bend or even compromise on their choices. Miramax stepped in and reaped the benefits.

2. From the first draft to the final cut took four years.

For twenty drafts and then the full development of the script this seems a bit long but not too long to think that it stalled at any point.

1. Sean Connery was thinking of auditioning for a part before he backed out.Â

He was thinking of playing the part of Caravaggio as well but decided not to at the last second. The part eventually went to Willem Dafoe. This must have been a popular character to play.

The film went on to win several awards as well as much acclaim.