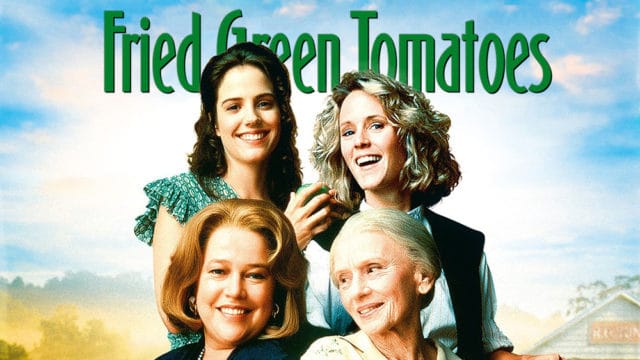 It might be what’s deemed a chick flick but Fried Green Tomatoes is also a very touching story that details the lives of two young women and the many trials they go through as they grow up together. After losing her brother at a young age to train accident Idgie Threadgoode becomes something of a tomboy and her mother kindly asks the young lady, Ruth, to try and straighten her out after a while. Idgie isn’t all that interested however but Ruth doesn’t give up and eventually the two form a strong, lasting bond that is only broken when Ruth passes away many years later.

It really is a good movie, even if it is a dramatic chick flick.

10. Mary Stuart Masterson did the bee stunts on her own.

The stunt woman that was supposed to handle this job called out at the last minute so Masterson had to step up to the plate for this scene.

9. There is a real WhistleStop Cafe in Juliette, Georgia.

The original building wasn’t actually a cafe to start with, but after the movie did so well the owner decided to convert it over.

8. The Irondale Cafe in Irondale, Alabama is the real Whistlestop Cafe.Â

The Irondale Cafe is the actual location that was written about in the book.

7. Idgie and Ruth’s relatonship was changed to that of friends instead of lovers.

In the book there was a lot more to this relationship than the movie showed. Even so you can definitely see that the bond Â between the two women is something more than just friendship as they go along. It likely had something to do with the fact that actresses did in fact want to show the story more to the author’s liking, and eventually the director must have caved just a little bit.

6. The author appeared on a game show.

The author actually became a recurring guest on a game show not long after the movie was out.

5. The movie went through three screenwriters.

This movie actually sat in development purgatory for a while as screenwriters seemed to come and go. The author even took a whack at developing the screenplay and then the director tried. Finally, somehow, it got done.

4. The director nicknamed the two main actresses Stu and Lou.

Mary Louise-Parker and Mary Stuart Masterson. Because hollering out for Mary just wasn’t a workable deal the director went ahead and gave them both nicknames to identify them easier.

3. The term Kudzu Kills shows up throughout the film.

As a lot of us know Kudzu is an invasive plant that grows over almost anything and tends to take over more often than not. It’s also seen throughout the film on the buildings.

2. The author has a cameo in the movie.

In the beginning of the film when Kathy Bates is attending a women’s group the author is the woman that directs the ladies to use their mirrors to look at their southward regions.

1. A lot of scenes were filmed in Pike County, Georgia.Â

The reason that the film has that authentic southern look is because a good deal of it was really filmed in Georgia.

So how many things did you know?