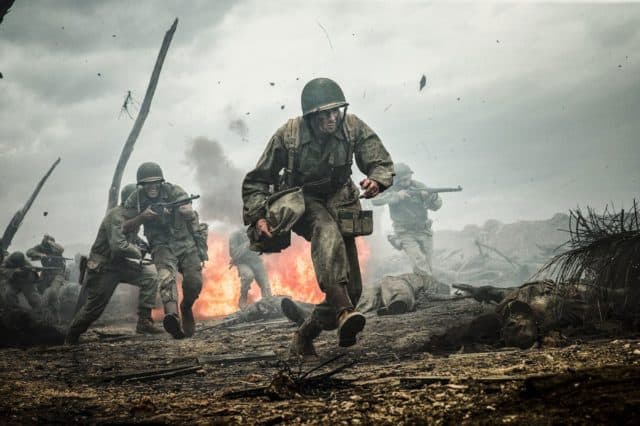 Hacksaw Ridge was probably one of the most powerful war movies of this generation. So often it’s said that a good soldier is one that will bravely defend themselves and their country with every tool they are given and every advantage they can take. But one man found a way to save his fellow soldiers and never once lift a rifle or other weapon to save himself. Desmond Doss was a combat medic in World War II that adamantly refused to pick up a rifle based on his religious beliefs and because of personal reasons. He was harassed, beaten, and threatened with imprisonment and never once wavered in his beliefs. When the time came for action he was never one to shy away, but he focused on saving lives rather than taking them, which is what makes this story so unique.

At times it takes more nerve to refuse to take a life.

10. Doss’s son watched the screening of the movie.

It’s said he was moved to tears as he saw the great job that Andrew Garfield did in portraying his father.

9. An attempt had already been made to buy this story from Doss.

Someone tried to buy the rights to his story years before but Doss had said that he didn’t want his life story ending up as another Hollywood movie.

8. Doss was not the only man to serve without a weapon.

There were several individuals that refused to carry a weapon and were granted the opportunity to serve without touching a rifle.

7. Some things were obviously changed for the film.

6. The director said that the war scenes were based on his nightmares.

Mel Gibson’s father was a WWII veteran that would tell his son of his days on the battlefield as bedtime stories. There’s no doubt that there would be a few restless nights following that.

For a war film that seems like it would be a record. It’s not, but it’s still rather impressive when shooting a film with this much content.

4. The battlefield was shot on a dairy farm.

The farm was in Australia and there were two smoke trucks that would circle around the area, seeking to obscure anything that might have ruined the shot.

3. The Wilhelm Scream is used in this movie.

The reason this is noted is simply because the Wilhelm Scream is something that you might notice in a lot of different films.

2. The director was set to play a role but gave it to Vince Vaughn instead.

Mel Gibson was originally mean to take the role of Sergeant Howell but wanted to stay focused on directing instead.

1. This is the second WWII film for Hugo Weaving.

If you remember he took the role of Red Skull in Captain America: The First Avenger. In Hacksaw Ridge he takes on the role of Desmond’s father.

Real courage is sticking by your own convictions and having the nerve to never waver.