Home
Movies
10 Things You Didn’t Know about “Half Baked” 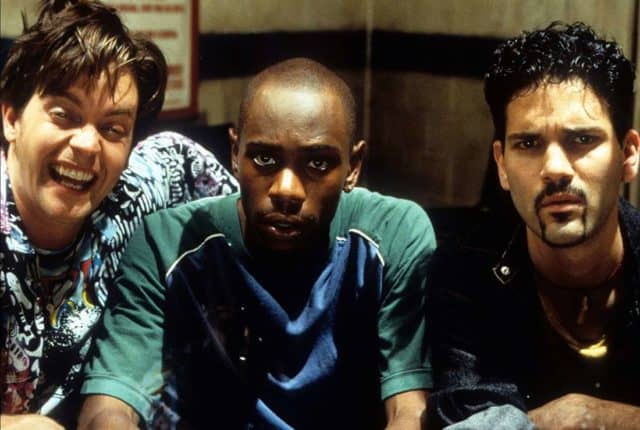 Half Baked is a comedy depicting four men that love to smoke weed and do as little as possible to get by. The four friends, who are also roommates, all work to make a living but tend to have little ambition to do anything with their lives other than work, eat, sleep, and of course, get high. When one of them gets busted for feeding a diabetic horse enough snacks to kill it however his buddies have to come up with a way to get him out of jail. Selling weed is about the only thing they can come up with, and eventually it gets them noticed by a notorious drug dealer.

Since it’s a comedy you can guess that things get a little hilarious.

He stated that the version that he helped to write was a lot funnier and that what came out was more like a weed movie for kids.

9. From the time the script was bought to when the film was released was only seven months.

That’s a very short amount of time which means that filming had to have been going fairly quickly.

8. Chapelle’s grandfather really was a subject in the Tuskegee experiments.

When he tells this to the scientist it would no doubt make a lot of people go blank, especially if they were to learn that it was true. After all the Tuskegee experiments involved thousands of African-Americans being infected with syphilis.

7. One of the co-writers can be seen in a cameo.

He’s working in the burger joint along with Scarface.

That almost seems like Thurgood would be set up to fail since every time he called her by her name or heard her last name he might get an urge to fall off the wagon.

5. The film uses a line from Jerry Maguire.

The ‘who’s coming with me?’ line is from Jerry Maguire and Bryan uses it to minimal success since the girl that goes with him willingly is ready to follow him but admits to being a lesbian.

4. Jim Breur had never gotten high until this movie.

He might walk around looking like he’s stoned half the time but Breur had never been stoned in his life until this movie. Chapelle apparently gave him a bag of weed to smoke before a take. The scene in which Samson was being arrested took multiple takes since Breur couldn’t get his lines right.

For whatever reason he didn’t want to keep going, so he demanded that they shoot all of his scenes in a day.

2. The soundtrack to Ghost is playing as the cop is crying over his horse.

I honestly did not know a horse could be a diabetic until watching this movie, but the amount of food the horse was given could have killed three or four diabetic individuals.

1. Tommy Chong has a cameo in the movie.Â

He plays the Squirrel Master and keeps Kenny safe while in jail.

If you need a cheap and easy laugh this movie is great.