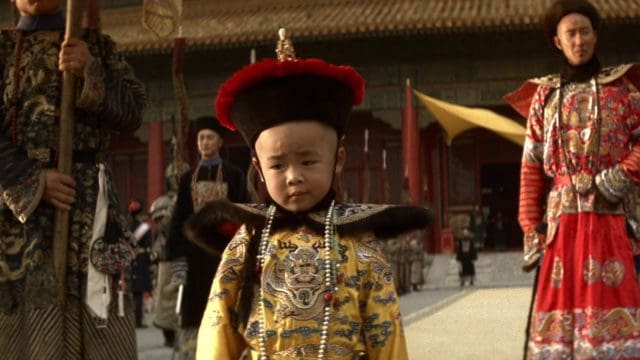 The Last Emperor is the story of a boy who became emperor and throughout his life was defined by it, ruled by it, and eventually overcome by it. Imagine foisting the life of a ruler upon a child who has no full understanding as of yet about where he sits, what is expected of him, and what his life will be like in the years to come. This would shape a young mind in ways that are not fully meant to be explored, and yet it was a life that was thrust upon a young child for no better reason than because it was deemed necessary.

Such a thing would mark a person for life.

She was visiting China during the filming of the movie and had plans to visit the Forbidden City. However since the movie was in the middle of filming she was denied by the Chinese government.

9. Around 1,000 children were brought in to play Red Guards.

It was very difficult getting them to seem angry enough to play the role as they needed to since they had no concept of the Cultural Revolution and the kind of attitudes that were common during the time.

8. This was the first feature film to be granted permission to film in the Forbidden City.

For a long time the Chinese government was adamant about the Forbidden City being kept away from those that might use such footage to show the world. Finally they relented.

7. Puyi’s younger brother was brought in as an adviser.

Pu Chieh was one of the few people that would have known his brother well enough and could have delivered some insight as to what he went through during his life.

6. No automobiles were permitted for private use.

A lot of the cast and crew had to get around on bicycles as there were no private automobiles that were allowed near the set.

5. The Chinese government made no restrictions on this project.

The director proposed two different projects, and the Chinese government selected this one. No doubt they were still ready to pass judgement if the director had overstepped his bounds.

4. Security around the set was very tight.

Peter O’Toole lost his security pass one day and they wouldn’t let him in. A known actor that was a vital part of the movie wasn’t even allowed in, that’s how tight it was.

Keep in mind that China’s population is quite large and to adequately show this in film it was necessary to hire this many extras, as CGI wasn’t exactly an option.

2. Puyi screamed in terror when he met the empress in real life.

This apparently annoyed her so badly that she had him taken away, given candy, and he still screamed in terror. She passed away the next day.

1. The real prison governor that rehabilitated Puyi has a cameo in the film.Â

He’s shown in the scene when Pu Yi received his pardon. He was also used as an adviser for this film.

The life of an emperor from childhood to adulthood, that’s a powerful story.