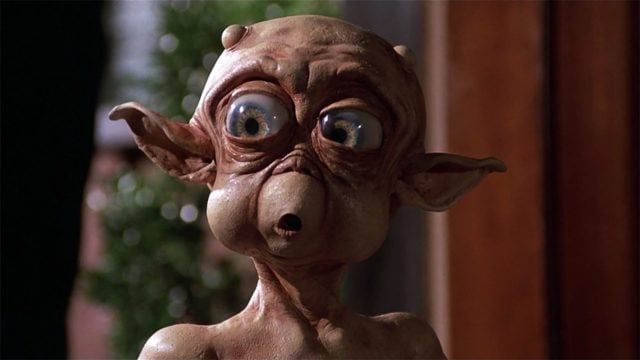 Four aliens that were sucked up in a vacuum by a NASA spacecraft that lands on an unknown planet are taken back to earth against their will and later are found and detained by NASA. They escape obviously and the youngest of them makes his way into a passing van where he meets the young male protagonist, Eric, a wheelchair-bound young boy that eventually has to deal with the troublemaking alien and in time comes to accept him. When FBI agents that have been tracking MAC (Mysterious Alien Creature) finally catch up to him and his family there is a shootout in which Eric is killed. Mac uses his powers to bring Eric back to life, and for this he and his family are granted citizenship in the US. It was a cute kids’ film that didn’t really go anywhere.

At this point those that used to love it barely remember the film sadly.

10. There was supposed to be a sequel but it was cancelled.

At the end of the film there’s a message saying “We’ll be back!” but the box office numbers were so horrible that the sequel was dumped without being considered.

9. Coca Cola and McDonald’s both backed the movie.

This wouldn’t be the first movie they backed that didn’t produce the numbers desired. So long as it upped sales for a bit that was all that mattered.

8. This was Jennifer Aniston’s film debut.

She did have a life before the cast of Friends after all. Remember Leprechaun? She was in that too.

7. Part of the box office take was donated to the Ronald McDonald House Charities.

At least some good came out of this, but I kind of wonder just how much the charity got since the film was so horrible.

6. The lead actor has spina bifida and uses a wheelchair in real life.

Bad as this is it was nice to see someone playing a part that wasn’t contrived at all.

5. Ronald McDonald played himself in the movie.

Ah, but who is Ronald McDonald REALLY? It’s easy to go by a title when no one gets to know your real name.

4. The movie kind of correlates with Avatar.

A young boy bound to a wheelchair bonds with an alien being. In Avatar a Marine with only basic intelligence has to bond with an alien body in order to complete a task set forth by his twin brother.

3. A lot of folks thought it was ripoff of E.T.

You can see why, an alien comes to earth, befriends a kid, and has powers that can heal someone just by touching them.

That was probably a wise move on their part. I don’t think this movie did anyone much good in terms of their career.

1. A real-life McDonald’s was built just for the movie.

It never served a single customer but it was built to code and kept up until it was torn down and then rebuilt in 2006. It’s still never been used.

Some movies are just a swing and a miss.