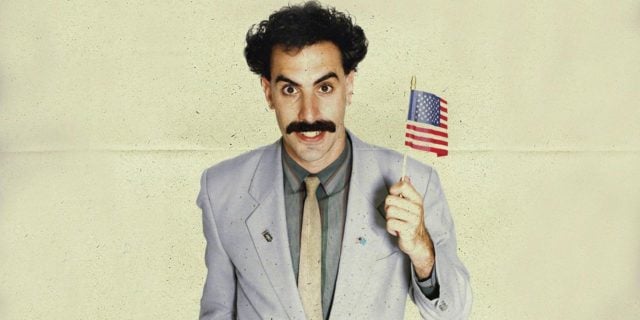 Borat will go down as one of the most surprising and best comedies in history.Â  Seriously, did anyone see this movie coming?Â  Sure Sascha Baron Cohen had the character featured on his Ali G show but did anyone really think this movie was going to be this good in the theaters?Â  Another thing….Can you believe this film is 11 years old already? Here are a few things you might not know, or may not have wanted to know, about Borat.

In truth everything about the character is false when it comes to his background. Borat lives in a Romanian village, his language is a mix between Hebrew and Armenian, and the writing he uses is either gibberish or the Russian version of Cyrillic. Even the credits are in Polish. Not a single thing about the movie identifies him as Kazakh.

9. Most of the movie didn’t have a script.

This was done to get the natural and real reactions of the people around him and it definitely offended a lot of people. The crazy antics he performed and the things he said were almost completely real in order to make the film in a documentary style. So when people are getting mad at him it’s very real.

8. Borat has been banned in Russia and most Arab nations.

Are you really surprised by this one? Cohen had no compunction about just going out and doing his own thing no matter what anyone else said or did. He was full on crazy throughout the entire film, so it’s not hard to expect anyone that was near him to want to give him a piece of their mind.

7. Kazakhstan has actually formed a cult following for the movie.

You would think that a country that took the brunt of so many jokes and slurs because of this movie would have banned it completely and given a warning to Cohen if he ever wanted to visit. But nope, they have actually embraced the movie and praised Borat. Granted, it came AFTER it was initially banned.

6. Believe it or not there is a sequel.

5. Not surprisingly Borat was hit with a number of lawsuits.

A lot of them were thrown out or settled out of court due to the fact that people thought that they were really participating in an honest to goodness documentary. I’m not sure who to call the dummy in this one.

4. Borat was expected to be a huge flop.

No one expected this movie to go anywhere and yet it topped the charts at one point. Really, I mean how did that happen? Â A foul-mouthed, ignorant foreigner traipses about being as disgusting as he can and it’s a hit. Was there something in the water when this film came out?

3. Sacha Baron Cohen is nothing at all like Borat.

Despite the fact that he was so invested in his character Cohen is nothing like Borat at all. He is actually a very intelligent and forward-thinking man that was trying something new and obviously got a response.

Come on, admit it. A lot of you just jumped for joy. Cohen has really no plans to bring Borat back at any point in the future, which is great. Once was enough, yeah?

Even with his brutal rendition of the country and his less than stellar reputation Borat somehow managed to inspire people to visit Kazakhstan. No doubt it was to make certain that the people there were nothing like him.

So how many things did you know about Borat?