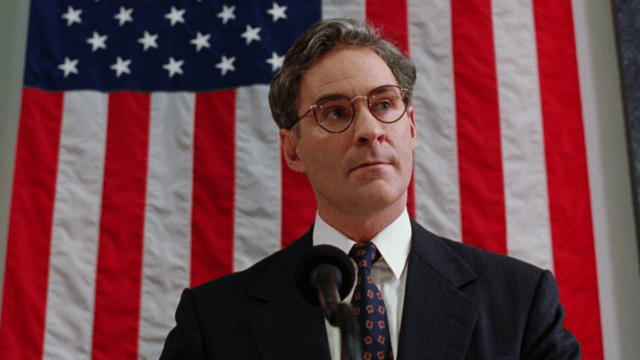 Dave has to be one of the more interesting and underrated movies about the presidency that’s ever been filmed. What would happen if a working man had to fill in for the president? And I don’t mean a billionaire that can claim to be a working man because he keeps long office hours and is never at home due to a slavish dedication to his money-making practices. I mean a man with two feet on the ground his gaze firmly within the scope of the society to which he belongs and that understands what other politicians seem to lose sight of: people need hope in order to keep moving forward. He doesn’t do everything right obviously but he does more good in one film than a lot of politicians seem capable of doing in multiple terms.

Yes, I just said that.

10. Bill Clinton was a big fan of the movie.

It’s not too hard to believe since Clinton had more of a sense of humor than a lot of presidents, sometimes.

9. Kevin Kline has played the president and the man impersonating him in two movies.

He played President Ulysses S. Grant and Artemus Gordon in Wild Wild West alongside Will Smith.

8. Kline wasn’t the first person to be thought of for the role.

Kevin Costner and Warren Beatty both turned down the role, though both men have had roles in films dealing with politics.

7. Many celebrities and politicians appear as themselves in the movie.

This would give a sense of realism to the movie that might be otherwise lacking if only extras and stand-ins were used.

6. There are three Oscar winners in the cast.

Those three are Kevin Kline, Ben Kingsley, and Oliver Stone. There are several nominees as well, of which Sigourney Weaver is one.

5. The author of the script had to take out a loan on his house to finance a next draft.

He was unhappy with the first draft and over the time limit so he had to work extra quickly and take out a loan on hsi home to get it done.

4. The White House scenes were filmed in a movie studio.

Every detail was painstakingly recreated since they couldn’t film in the actual White House for security reasons.

3. Robin Williams was also considered for the role of Mitchell.

He might have brought a lot of comedy and even class to the role but it seems like he would have gone too over the top.

2. Oliver Stone has a cameo in the film.

1. There is a nod to indiscretions of JFK in the film.Â

When Dave is brought in to stand in for Mitchell it is because Mitchell is trying to meet up with one of his secretaries. The rumor that JFK was having an affair with Marilyn Monroe is believed to have sparked this moment.

Dave is a quirky and fun movie that shows what a man that isn’t so tainted by politics could possibly do. It’s a fantasy obviously but a pleasing one.