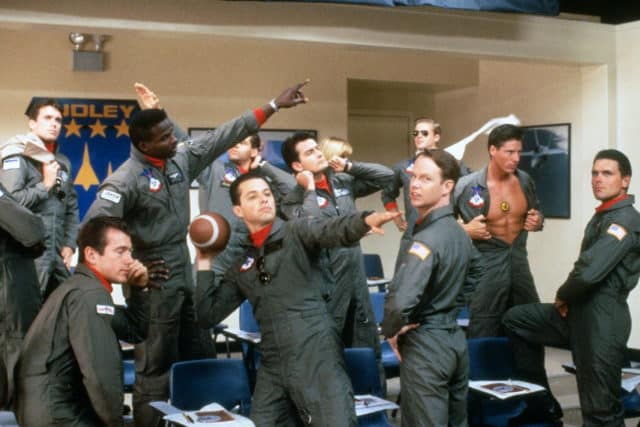 Hot Shots was made when spoof movies were really starting to get popular and helped the genre begin to once again gain a foothold in Hollywood. It was kind of a goofy movie but that was the point really since nothing was meant to be taken seriously. Some people actually had an issue with it while others loved it. Spoof movies are not usually universally loved though so everything usually turns out okay. Besides, Hot Shots did well enough that it earned a sequel which was just as ridiculous if not more so.

But how much of the film do you remember?

10. The scene in which an olive was popped into Valeria Golino’s mouth was done without trick photography.

It might have required a lot of takes but Valeria insists that there was no trick photography. She must have had some seriously tight stomach muscles then to snap that olive back to her mouth so skillfully.

It makes more sense really and instills a greater sense of safety when you think about it. Obviously the guy catching the football is meant to seem like he’s falling overboard, but really it’s just more Hollywood magic.

8. The crew appeared to be at sea thanks to a series of clever angles.

They were shooting at an old, decommissioned naval base and so they had a rather good view from which to work. By manipulating the angles it was possible to get a good shot that made the crew look like they were on the open ocean.

7. Topper Harley’s name was taken from a Harley-Davidson scooter.

It might not sound so fierce now. Sorry for stripping away the mystique of it. Maybe you shouldn’t read the next one if you liked the character that much.

Well that’s not too bad. Sean is a very masculine name. It’s not the same as Topper but it’s definitely fit for a man.

5. Charlie Sheen, Jon Cryer, and Ryan Stiles would work together later on for Two and a Half Men.

It almost seems like their professional relationship was meant to be.

4. The movie used stock images and scenes from other films to complete it’s look.

There were various shots from many different movies, particularly scenes that had to do with the aircraft carrier and the jets that were landing on it or taking off.

I kind of get the feeling that Bridges was chosen over Scott just because Scott hasn’t always seemed like the type to play comedic roles. Of course he did play the grandfather in Angus, but that was years later.

2. It was running joke that Saddam Hussein played himself in the movie.

Obviously this wasn’t the case but at the time Saddam Hussein was such a hated figure throughout the world that it was funny to think about.

I’m sure a lot of you knew that, it just seemed like it might needed to be said again.

So how many things about the movie did you know?