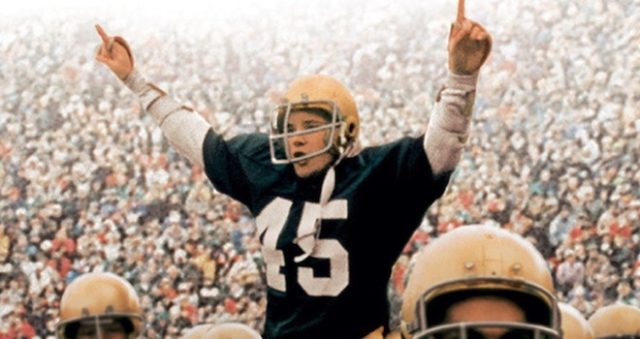 When talking about the greatest sports movies of all time you cannot, CANNOT leave out the epic masterpiece that is Rudy. A lot of people in this day and age that didn’t grow up with this film as one of their most favorite of all time need to be introduced to real guts without the promise of glory, then they’ll understand what it means to persevere and actually struggle to attain your goals. This was a man that did anything and everything it took to get to where he wanted to be, and in the end he finally achieved his goal. Rudy was and still is one of the best movies of all time.

But how much did you really know about it?

10. The real Dan “Rudy” Ruetigger was an extra in the stands during the final game.

The guy that Ned Beatty grabs in the stands to tell him that Rudy is his son is the real Rudy.

9. This wasn’t the first sports film that the director and his writer collaborated on.

The director and the writer got together for Hoosiers as well, which is also considered to be one of the best sports films of all time.

Despite being made out as the villain in the film Devine was always very supportive of Rudy and was all for having him suit up for his final game. He was content to let himself be portrayed as the villain however to get the film made.

7. The scene in which the players lay down their jersey’s never happened.

Despite the necessity of the scene to keep Devine as the villain it didn’t please the real Devine, who called it completely unnecessary. It seems like this would have been a slap in the face.

6. The final scene of the movie was filmed during halftime in an actual game in 1992.

The game was Notre Dame vs. Boston and the crowd was very real. The chants of Rudy were very real as well. At Notre Dame he’s still a noted legend.

Rudy had two older sisters. Frank was a composite for every person that told him he couldn’t do something.

4. Jerry Goldsmith did the score for Rudy.

It was considered odd to have an award-winning composer do the score for a movie that grossed so little at the box office.

3. This was Vince Vaughn’s film debut.

He played the fiery-tempered Jamie O’Hara, the guy that had an issue with Rudy tackling him during the last practice.

2. The groundskeeper wasn’t just one person.

There were three individuals that helped Rudy to achieve his goals and that helped him out while he was trying to make his way towards Notre Dame.

1. Rudy was in fact carried off the field by his teammates.Â

The act of being carried off the field by his team was very real. The two teammates that carried him got special recognition as well in the film.

This movie is a definite classic, and one that nearly everyone should see at least once.