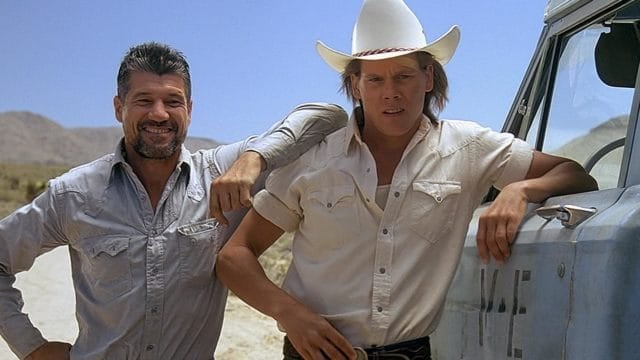 If you don’t know about the original Tremors movie by now then you need a little cinema history pronto. It was never given much of a chance by critics and to be honest it was one of those movies that should have been one and done but the cast and the story were good enough to make it a cult classic. While the premise wasn’t entirely original the acting made it so great that the idea was something that people could either get behind or just left behind. Personally this was one of the best movies of its time despite being kind of campy in some spots and obviously having a lower budget.

It was still so awesome though.

10. The original design for the graboids was kind of silly.

They were supposed to feature an outer shell that the worm would emerge from when it came above ground. This looked just a little too phallic for the liking of the designers.

9. There are only two interior sets in the entire movie.

Inside Walter’s store and inside Burt’s rec room are the only interior sets in the whole movie. Everything else is outside.

8. This was Reba McEntire’s first movie appearance as an actor.

She’d appeared as herself before but this was the first time she was playing an actual role.

7. The movie did better on VHS than it did in the theater.

In the theaters it didn’t pull in big audiences but when it came to video it sold out and earned way more than it ever had in the box office.

6. It originally had an R rating.

There were a lot more f-bombs throughout the movie before it got dubbed and edited, which finally gave it a PG-13 rating with only two f-bombs.

5. Michael Gross had just come from filming the last episode of Family Ties.

The show had been a long-running part of Gross’ life and had to be tough to walk away from, but he latched onto Tremors pretty easily.

4. Kevin Bacon wasn’t too thrilled about doing the movie.

At one point he was beside himself as he believed that his career was at an all-time low since he was shooting a movie about underground worms. Nope, Hollow Man was the low point.

3. Burt’s wall of guns had to be rebuilt several times.

Since they shot in different locations the wall of guns had to be torn down and rebuilt a few different times. Unless you really took the time to notice it there wasn’t much difference.

2. The town was a completely built set.

Perfection really looks like it could have been a start up town at one point, but the entire thing is a set that was built for the movie and torn down afterwards.

1. Melvin’s parents are reportedly in Vegas but they’re never heard from or mentioned.Â

Honestly if this was your kid the chance to go to Vegas would seem like a dream since Melvin was such a walking nightmare most times. Of course his parents taking off and leaving him could have been the reason why he was that way.