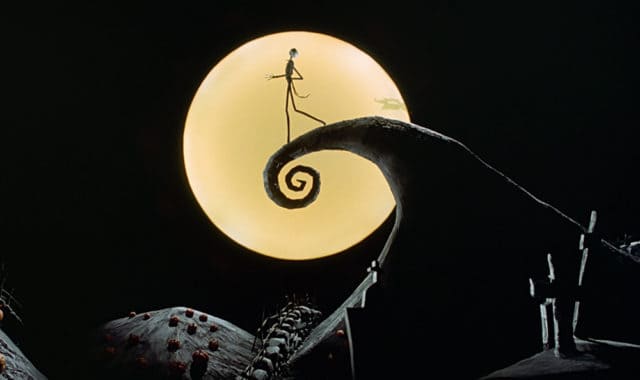 Now and again I really have to remind myself that The Nightmare Before Christmas is a kid’s movie. If you really look at the film it’s kind of disturbing in a way since it deals with a few subjects and visuals that might scare a lot of children and give the others, well, nightmares. The main character is a skeleton, the evil genius has a habit of literally picking his brain, and the love interest is able to tear herself apart and then stitch herself together again. I’d love to hear about the kind of nightmares that Tim Burton had as a kid that led to this, but it might make a sleepless night a distant memory for a while.

In any case, kids tended to love it, and still do.

He was very protective of his work and didn’t want to ruin the original by making one sequel after another. Plus, what needed to be said was covered in the movie.

It took up to 12 stop-motion moves for 1 second worth of film. Now multiply that by how long the film was and then take into account everything else that has to be done.

There hasn’t be a lot of explanation as to why his original version was taken out but it would have been great to hear.

7. Vincent Price was cast as the original voice of Santa Claus.

Price was supposed to do Santa’s voice, which might have been eerie, but after the passing of his wife his health began to fail and the lines he did perform were not usable.

6. There’s an extended scene in which Santa visits years later.

By this time Jack has several skeleton children and is still more or less running Halloween town.

5. Oogie Boogie was supposed to be Dr. Finklestein in disguise.

Burton apparently got so worked up over this idea that he kicked a hole in the wall. It would have been kind of a dumb plot twist really.

4. Tim Burton didn’t get to direct this movie.

He was busy on Batman Forever and Ed Wood so he had to have Henry Selick take over. Apparently he and Burton didn’t see eye to eye on a lot of things.

3. It was thought to be too dark for Disney.

This is why the film wasn’t released as a Disney film right away but was instead placed on the Touchstone Pictures banner. It was eventually brought back to Disney in 2006.

2. Burton almost made this a TV special.

That seems like it would have diminished the impact it would have had on the audience. Some scenes were far more impressive in the theater.

It’s brief but when the scene is shown in the forest where the doorways are featured leading to each distinctive land there is a door with a familiar blue and white pattern on it with fireworks going off.

In this town, we call home, everyone hails to the Pumpkin Song.