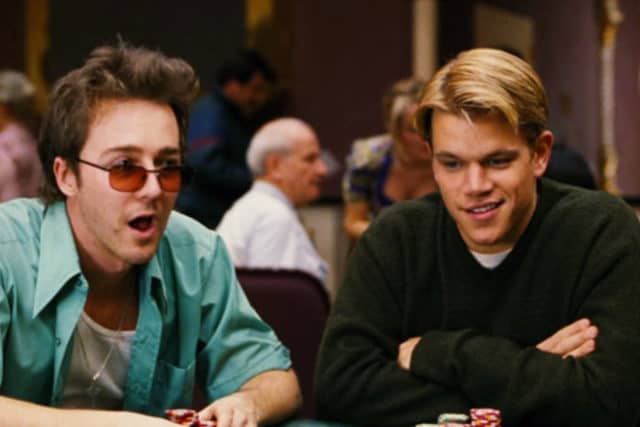 Rounders is about a young law student named Mike McDermottwho dreams of playing in the World Series of Poker in Las Vegas, Nevada. He’s a reformed gambler that’s trying to live his life on the straight and narrow but has trouble doing that when his buddy, Worm, gets out of jail and cons him into playing high stakes poker yet again. When Worm is discovered cheating both he and Mike are beaten severely, after which Worm flees, leaving Mike to take on his debt to a dangerous pimp and to those that were cheated. Eventually Mike ends up playing a Russian mobster by the name of Teddy KGB and winning back everything he lost. From that point his course is clear as he lights out for Las Vegas.

Gambling is definitely a compulsion, though some insist that it’s a disease.

10. Matt Damon and Edward Norton both played in the World Series of Poker.

They entered the $10,000 buy-in and ended up losing the game to one of the former champions, Doyle Brunson.

9. Worm was supposed to be a smoker.

Edward Norton is serious about his health and staunchly refused to take up smoking for the character.

8. Norton ad-libbed a lot of his lines.

This was discovered in an interview and seemingly wasn’t a problem as the lines were left in the movie.

7. Neve Campbell was considered for the role of Jo.

The part went to Gretchen Mol instead. Her part is fairly substantial but it’s more of a plot device than anything.

6. The film is based in part on actor Norm MacDonald.

I’m not really sure how this was supposed to be based on Norm MacDonald since the details are lacking but okay.

5. There are many types of games being played throughout the movie.

There’s No Limit Hold ‘Em, 7 card Stud, Draw or Stud, Forced Rotation, and so on and so forth. There’s a lot of different versions of the game and each person usually has their preference.

4. The film was set in New York but was shot in New Jersey.

It’s not that big of a jump really but there are many differences that can be noted.

3. The writers have cameos in the film.

They play two of the extra players that are there to be cited by Mike as how to look for other people’s tells.

2. The chips and cards provided for the film are all authentic.

The chips came from Atlantic Standard Molding while the cards came from the United States Playing Card Co.

1. Some of the quotes that Mike cites come from the same poker book that he is seen with in the film.

The book was written by former poker champion Doyle Brunson and Mike keeps money in the book and takes several quotes out of it to describe the game.

As a poker film it’s pretty entertaining and doesn’t get enough credit for being kind of a cautionary tale of what not to do when you’re playing poker. Such as don’t let a waste of space friend cheat when you can win on your own.