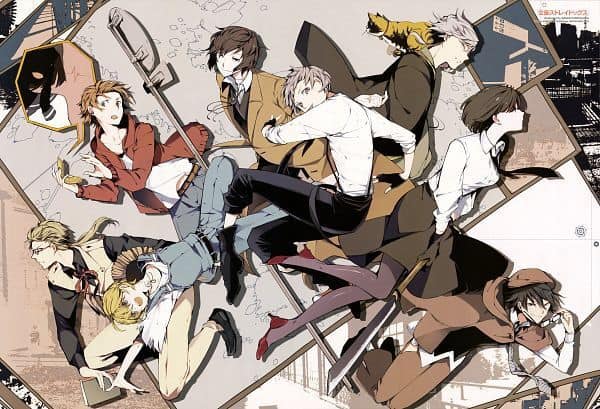 If you’re a fan of Japanese anime, you are probably already are familiar with the title Bungo Stray Dogs. Quite frankly, if you don’t follow anime, you’re probably wondering what on Earth this even refers to. The name might seem a little bit strange, but it’s actually a very interesting story and it’s one that’s worth taking a look at. If you want to know more, consider these 10 things listed below.

1. The story evolves more than most

This is not a story that’s brand new. It is proven because it’s been around for about six years now. During that time, the writers have had the opportunity to tweak the story and make any changes necessary in order to maintain its continuity or improve its popularity. Most of these types of stories are basically set in stone, but this one is more fluid. Its developers decided that they wanted it to grow and evolve over time.

2. It seems to generate more buzz than most anime series

Part of this is because of the way the show was released. It started out as a miniseries. It was the same story but it was released in two separate parts with each part being shown over the course of about three months time. There was also an approximate three month break in between part one and two, so the initial anime release took almost an entire year to take place. This only served to make fans even more excited than they already were.

3. There was some doubt about creating an untested anime series

It proved to be an exceptionally popular title, but those connected with the project weren’t always so sure. There was actually a lot of apprehension on the part of the production company because they didn’t know how the public would respond. Fortunately for all parties involved, it worked out.

4. The show was more successful than anybody thought it would be

Right now, it is known that there will indeed be a third season of the series. Although it is not known exactly when that third season will be released, fans can at least can take solace in the fact of knowing that sooner or later, it will happen. It’s worth noting that a movie has also been made. You might say that there has been far more success attached to this project than most people ever thought possible.

5. The story revolves around the Supernatural, but not the way you’d think

This story is popular for a few different reasons. One of them is because it focuses on elements of the Supernatural, something that has become wildly popular in many different cultures. In addition, it focuses on normal, everyday people who just so happen to have Supernatural gifts. The story really follows these individuals in order to see how they use those gifts in their day-to-day lives. It creates a lot of suspense and it’s definitely a story that’s worth seeing for yourself.

6. It serves as an interesting walk into the different sides of humanity

Another reason that it’s so popular is because it shows how different people react to unfamiliar situations, especially when they think that they can do anything they want. The people that have the Supernatural gifts use them in a lot of different ways. For example, one person in the story use their gifts to help the mafia. Another chooses to incorporate their gifts into selfless acts in order to help society and yet another uses those gifts to create a profitable business.

7. Writers wanted to create something that viewers could easily identify with

This is precisely why so many people love the story. It shows many different sides of humanity and it gives people an opportunity to imagine what they might do if they were in a similar situation.

8. They came up with it when having a discussion about which choices they thought people would make if they didn’t have any limitations

The people in this story don’t believe they have any limitations because they’re able to use their Supernatural gifts to do virtually anything they want. It makes you stop and think about what you might do if you didn’t have any limitations yourself. You might not have the exact same types of gifts that the people in the story have, but it does make you stop and think about the different ways that you hold yourself back because of perceived fears of failure, etc etc. It makes you wonder what your life would be like if you truly went for broke and just tried your hardest at everything you wanted to do without allowing anything to hold you back, especially those self-perceived limitations.

9. The show piggybacks on the popularity of Supernatural phenomenon

Whether you believe in Supernatural gifts or not, it’s a fun idea to explore and it does make you think about the ways that you shoot yourself in the foot, for lack of a better expression, when you hold yourself back as opposed to achieving your full potential. It also makes you think about what you might do in order to make the world a better place as opposed to leaving things worse than the way you found them.

10. It provides a nod to famous books written throughout history

All of the characters, as well as their gifts, are named after famous books that have been written throughout the years. It serves as an homage to creative literary works.