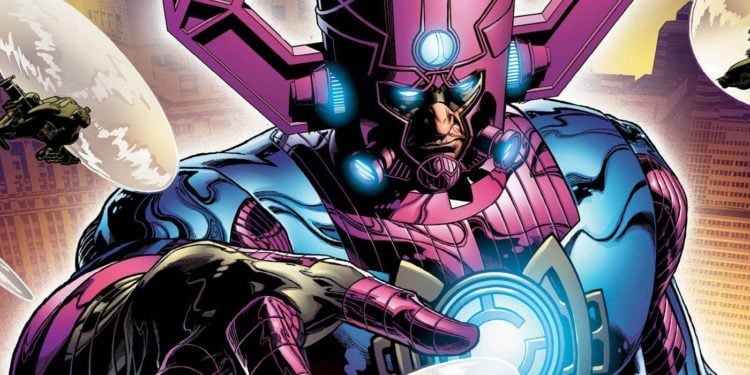 Galactus is one of the most memorable characters in the Marvel Comics setting. In short, he is one of its cosmic entities, whose role sees him consuming planets to sustain his own life-force. As a result, Galactus is unusual in that he is often an antagonistic figure, though he isn’t evil in the same sense as most Marvel Comics supervillains. Here are 10 things that you may or may not have known about Galactus:

Galactus is one of the numerous characters created by Stan Lee and Jack Kirby. In Lee’s case, he wanted a new villain who was motivated by his hunger rather than his malevolence. Meanwhile, Kirby’s influence can be seen in the character’s god-like presentation, which can be attributed in significant part to Kirby’s personal passion for mythology.

Later creators have filled out Galactus’s background. For example, it has been revealed that he was once a mortal named Galan, who was a member of the most advanced species in the universe at the time. Unfortunately, he happened to have been born at a time when the Multiverse was coming to a conclusion.

3. Decided to Die In a Glorious Manner

As an explorer, Galan was tasked with finding a way to escape the end of the Multiverse. In this, he failed, with the result that when the end came, he proposed to the survivors that they fly into the central point that the universe was collapsing into for the sake of going out in a glorious manner. None of them expected to survive the experience.

4. Created From the Merger of Galan and the Sixth Cosmos

Galan should’ve died from the decision. However, he didin’t because he was approached by the Sixth Cosmos, which was the sentient embodiment of the Multiverse that was coming to a conclusion to make way for the next. Together, they formed a being called Galactus that was capable of surviving the rebirth of the Multiverse, thus making him the oldest being in the Seventh Cosmos.

5. Could’ve Been Killed By One of the Watchers

For the first part of his existence, Galactus remained vulnerable. In this period, he could’ve been killed by one of the Watchers named Ecce, who had stumbled upon the vessel that contained him. Ecce knew that Galactus would go on to become a world-devourer, but refrained from attacking because of the Watchers’ determination to avoid interfering in matters, which is something that has caused him significant guilt in spite of the fact that he and the rest of the Watchers have since learned that Galactus’s continuing existence is necessary for the Multiverse in some way.

6. He Is Necessary to the Existence of the Multiverse

Cosmic entities being cosmic entities, it should come as no surprise to learn that Galactus is very powerful. For instance, he possesses the Power Cosmic, which enables him to perform a wide range of feats that seem divine in nature. Some examples include but are by no means limited to cosmic awareness, resurrection of the dead, and transmutation of matter.

On top of that, Galactus possesses super-tech. The best-known example would be the machines that he uses to break down planets for consumption, which is a more efficient method than his own planet-eating capabilities.

9. His Most Famous Appearance Isn’t His True Appearance

Galactus’s most famous appearance isn’t his true appearance. Instead, it is the product of a flawed human attempt to understand something that exists on a cosmic scale. It has been shown that other species in the Marvel Comics setting see Galactus as a god-like figure as well, though their versions draw more from what their cultures would see as god-like.

10. Some Showings Are Much Weaker than Others

Amusingly, Galactus’s power can see significant variation at any one moment because it depends on whether he has been keeping himself well-fed. This is a very convenient way to justify his poorer showings in the comic books, which happens to be pretty sensible as well by the standard of these things.