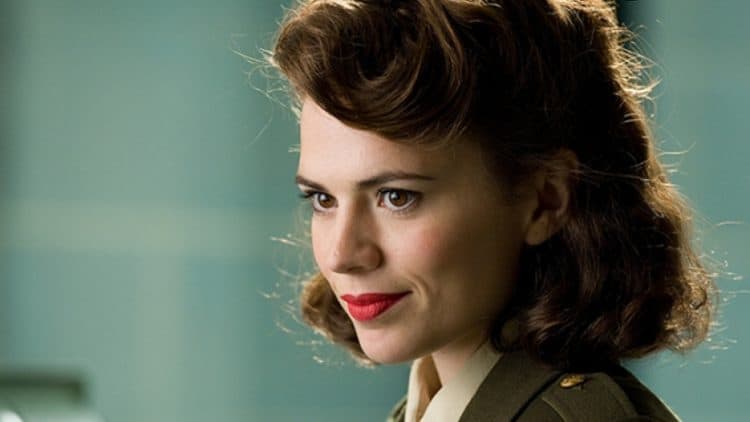 Hayley Atwell comes off as a very strong-willed woman when she’s on screen and in person it doesn’t seem as though she’s any different. She might not be as tough or as apt to put a person on the ground as Peggy Carter would be, but she’s still got the attitude that she knows what she’s doing with her life and believes in what she says. That being said she’s also a very lively woman that enjoys her life and stands up for her beliefs in a way that’s not negative or even overly-aggressive, but instead stands up in a manner that is both respectful and joyful for the chance to be able to speak her beliefs. As far as her career goes she’s done a fair amount in the past decade that has been received quite well by many and has been empowering as well as positive in terms of the characters she’s posed as.

Here are a few things about Hayley you might not have known.

She did this at a workshop that she attended with her mother and while the visual is pretty strong, especially when it comes to having a child walk over hot coals, it was obviously not so traumatic that it has ruined her in any way. It almost seems as though it’s made her stronger.

9. Hayley became a vegetarian at the age of 8.

She watched someone put a lobster into a pot of boiling water and became a vegetarian not too long after. This is the same story as a lot of people and quite honestly it’s not hard to see how it happens, but with respect it’s easy for vegetarians and meat eaters to get along without any struggle between them. It’s a lifestyle choice and therefore easy to respect.

Throwing your voice is a rather impressive skill to be honest and not something that’s easy to do. The fact that some people can do it is enough to really make you wonder how it happens and what mechanics go into it.

7. She enjoys pranking her costars.

This kind of shows that she has a rather good heart and enjoys having fun behind the scenes. In one situation she actually filled her costar’s dressing room with plastic balls, which is perhaps kind of juvenile but still a lot of fun since it’s not destructive or even inconvenient.

This really makes Hayley sound like she was a tomboy growing up, which could have been true despite the fact that she is quite feminine and is able to clean up quite nicely. Anyone ever watch a game of rugby? It’s kind of an aggressive sport, but obviously enjoyable.

Hayley isn’t too shy about these types of scenes since she embraces every little nuance and flaw that makes her who she is. This is when you can see just how confident a person is since nude scenes are really meant to show everything, good and bad.

4. She was very enamored of her character Peggy Carter.

Being an only child can make a person increasingly spoiled, but it can also give them a different perspective on life that those with siblings don’t have. Being an only child is kind of lonely at times unless a person is just that outgoing, and Hayley seems to have been very outgoing throughout her life.

2. Her first appearance on TV was in a Pringles commercial.

Everyone’s got to start somewhere, and plenty of celebrities have started out in commercials or even in positions that didn’t allow them to really become known until a stroke of luck came along and changed their lives.

1. Hayley gave up obtaining a degree to pursue a career in theater.

When you look at those that have given up their education to become performers it’s kind of tragic in some ways but very promising in others. Hayley is one of those that went through a secondary education and completed it and then walked away from a college degree. It’s hard to really condemn anyone that’s been through their college years even in part, but those that leave high school for whatever reason seem to have lucked out by finding a career in film and TV.

In terms of popularity she has been a woman that’s been quite loved since she was included into the MCU. In fact some people would love to see more of Peggy Carter.