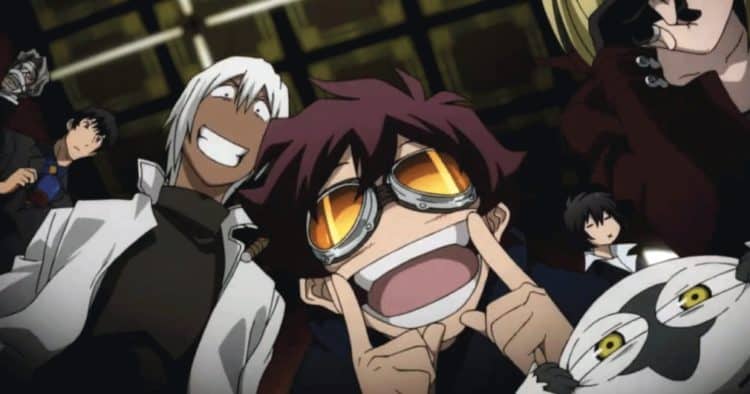 Kekkai Sensen is an action, science fiction comedy in the Shonen demographic. If you’ve heard of it but you’re not sure if it’s something you want to invest your time in, then we have some information that might help you make up your mind. Here are ten things about Kekkai Sensen that you probably didn’t know.

1. The Manga is available in ten volumes

When you think about it, ten volumes isn’t so much that it would take forever to read it all, so if you were wondering about the length of the original story, this is it. It’s moderate in size without being overwhelming. There are parts that are funny and other parts that are intense, so overall, we’d have to say that the Manga presents a well-balanced story.

It’s important to know if you’re looking for the manga or any other format of Kekkai Sensen, the title is Blood Blockade Battlefront. This will make it easier for you to find if you’re interested in accessing a copy either through streaming or for purchase. The first four volumes were released in English a year after the Japanese language manga came out with a release date of September 27, 2011, under the ISBN 978-1-595-82718-0.

3. The plot is multifaceted

A young photographer called Leonardo Watch seeks to obtain “The All-Seeing Eyes of the Gods.” When he finally gets them it costs his sister her eyesight. Afterward, he relocates to join Libra and fights terrorist and monsters.

4. Kekkai Sensen is available in anime

The manga for Kekkai Sensen was adapted into an anime which was streamed in North American under licenses obtained by Funimation in 2015. The first season was so well received that a second season was released recently between October and December of 2017. Viewers gave the animated version of Kekkai Sensen high reviews because they not only enjoyed the storyline, they also liked the portrayal of the characters.

Some of the comments that important anime critics who are pros in the business made about the manga series are the dialogue is “very sharp,” and the writing also got high marks for being strong. This is a high compliment from critics who generally tear a manga apart and find fault in some area.

6. The consensus is that it’s strange at first

If you start reading or watching Kekkai Sensen, you’ve got to stick with it to get the full benefit. As some critics have noted, when it first starts out, it’s a bit strange. It doesn’t stay that way for long. Although it’s unique, you soon get used to what’s going on and it doesn’t feel so odd. It’s definitely for readers who enjoy a lot of action in their stories.

As one reader noted, the manga is known for suddenly dropping the reader into the middle of a situation or story without any preparation whatsoever. There are times when there is no setup for what is coming. While some don’t like this style of writing, others find it to be interesting and very appealing. When it comes right down to it, though, it’s purely a matter of taste and preference.

8. The adaptation is highly praised

Moving away from the manga and turning to the adaptations which are a little different when you compare them tit for tat, the manga has received its share of praise, but the adaptations have been even more well-received. In particular, the work that has been released by the Bones studio is high on the list of favorites when it comes to interpretation of the story and the art involved.

9. Blood Blockade got a perfect rating

Rachael Verret is a writer who watched the entire Blood Blockade Battlefront series and she proclaimed it to be the best. She gave it a perfect score in her critical assessment for being jovial and full of energy. She thought it was one of the most clever anime’s she’s seen and she had a lot of positive things to say about it.

10. Kekkai Sensen is available in DVD

The first series of the Kekkai Sensen DVD made its debut in 2015 and it sold a remarkable 4,784 copies and the Blu-ray edition sold an even more impressive 12,171 copies within just one week of its availability. This shows you how popular the anime was and why it may be one that you want to at least consider checking out.