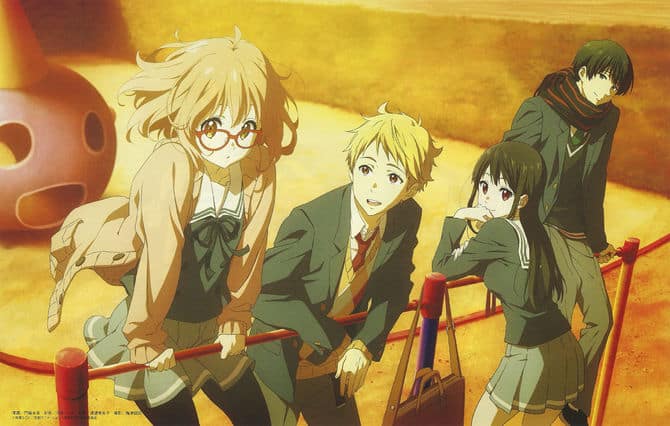 1. Called Beyond the Boundary

Kyoukai no Kanata is the Japanese name of the series. As a result, there might be those who are more familiar with it under the name Beyond the Boundary, which is what is used for the English releases.

Like a lot of series aimed at the same audience, Kyoukai no Kanata has a high school setting. However, the high school isn’t the focus. Instead, it serves as the setting because the main characters are high school students.

3. There Are Entities Called Youmu

One of the most important points about the Kyoukai no Kanata setting is that there are supernatural creatures called youmu, which are believed to be physical manifestations of human emotions. Youmu can take on a wide range of forms, but for the most part, they are harmless. Unfortunately, there are plenty of youmu that are anything but harmless, which are particularly problematic because normal people can’t see them.

There are humans called Spirit World Warriors who have been trained to take down youmu when they become a threat to humans. It isn’t uncommon for Spirit World Warriors to make use of more human-tolerant youmu when doing their jobs. Moreover, they sustain themselves by collecting the youmu stones dropped by slain youmu, which are valuable enough that there is a market for them.

5. Some Youmu Can Be Very Human

Some youmu can be very human when it comes to their appearance. In fact, there are some youmu that are human enough that they can produce children with humans, thus resulting in what are called half-youmu or hanyo for short.

6. The Protagonist Is a Half-Youmu

The protagonist of Kyoukai no Kanata is a half-youmu named Akihito Kanbara. As such, he possesses the ability to heal from even lethal injuries in little more than an instant, though getting hurt to that extent is still very painful for him. Generally speaking, Akihito’s human half is the side that is in control, but there are circumstances that can cause his youmu half to come out.

7. Akihito’s Youmu Half Is Called Beyond the Boundary

The title Kyoukai no Kanata refers to Akihito’s youmu half, which has received the name because it is the single strongest youmu that is known to exist, so much so that it can destroy the entire world. This is one of the causes of the events in the series because there are parties out there that are either interested in making use of said youmu or have a very reasonable fear of what it could do.

8. The Heroine Is Mirai Kuriyama

Kyoukai no Kanata’s heroine is Mirai Kuriyama, who possesses the rare power to manipulate blood. With that said, Mirai’s appearance as well as her personality aren’t anything like what one would expect from someone with such a power.

Besides Akihito and Mirai, the other two main characters are Mitsuki and Hiroomi Nase, who are kind of Akihito’s friends but not quite. This is because they are there to keep an eye on Akihito, meaning that while they might get along with him, their relationships are complicated by the awareness that there might come a day when they might have to move against him.

10. Akihito’s Mom Is Embarrassing for Him

Akihito’s mother is a powerful Spirit World Warrior named Yayoi Kanbara. Their relationship can be summed up as Akihito being the serious child and Yayoi being the eccentric parent, which is why Akihito finds her to be rather embarrassing. This isn’t wholly unreasonable, seeing as how Parents’ Day in elementary school saw Yayoi showing up in a panda costume and then participating in the class while sitting in a student’s seat.