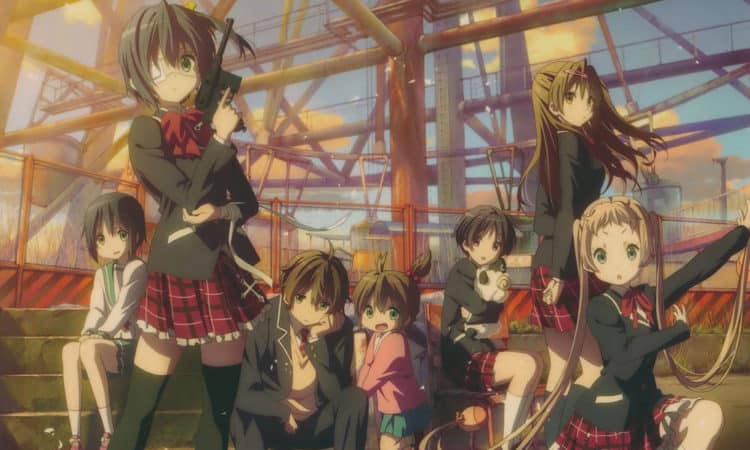 The Japanese name of the series is Chunibyo demo Koi ga Shitai! For those who are curious, a literal translation would result in something along the lines of, “Even with Eighth Grader Syndrome, I Want to Be in Love,” which is a mouthful to say the least.

Since Chunibyo demo Koi ga Shitai! is such a mouthful, it is sometimes shortened to Chu-2. Not coincidentally, this would be pronounced as Chuni, thus making it an example of wordplay.

Technically, chunibyo means “Middle School Second Year Syndrome,” which is why it is sometimes called “Eighth Grader Syndrome.” It refers to young teens who want to stand out so much that they manage to convince themselves that they have either some kind of secret power or some kind of secret knowledge. Initially, chunibyo wasn’t anything more than a colloquialism, but it has revealed more serious examination in more recent times.

Naturally, chunibyo plays a very important role in Love, Chunibyo & Other Delusions. In fact, the main characters of the series either have chunibyo or used to have chunibyo. As a result, the syndrome has a huge impact on how they behave for one reason or another.

5. The Male Protagonist Used to Have Chunibyo

The male protagonist is Yuta Togashi. He is one of the main characters who used to have chunibyo, which resulted in him being alienated from his classmates in middle school. Due to this, Yuta is happy to be going to a high school where no one knows him because that is essentially a fresh start for him.

6. Yuta Used to Call Himself the Dark Flame Master

When he was in middle school, Yuta used to call himself the Dark Flame Master. Moreover, he went as far as to build up a collection of items relating to the persona, which included bandages that he would use to warp his arms. Unsurprisingly, Yuta is more than a little bit embarrassed by this, which is why he hides it as much as possible.

7. The Female Protagonist Has Chunibyo

Meanwhile, the female protagonist is Rikka Takanashi, who retains her chunibyo even when she is in high school. As a result, she wears an eyepatch, wraps one of her arms in bandages, and sometimes dresses up in a Gothic Lolita costume, which refers to a fashion style that kind of looks like Victorian dolls. She becomes involved with Yuta because she knows about his chunibyo in the not so distant past.

8. Rikka’s Chunibyo Is a Coping Mechanism

In Rikka’s case, her chunibyo is a coping mechanism. In short, her father died while her mother left when she was very young, with the result that she developed her delusions as a way of making it easier for herself to interact with the rest of the world. As such, she doesn’t react to well when her delusions are stripped from her, which is one of the things that complicate her eventual relationship with Yuta.

9. Shinka Nibutani Used to Have Chunibyo

Another important character named Shinka Nibutani is similar to Yuta in that she used to have chunibyo. As a result, she has followed a similar path in concealing her past as much as possible. Publicly, Shinka’s persona is that of a kind and gentle girl, but in more private circumstances, her true feelings can include a fair amount of bitterness as well as a surprising irritability.

Sanae Dekomori is an anime-original character who has chunibyo. She became acquainted with Rikka through the Internet. Furthermore, she became acquainted with Shinka because she possessed the last piece of evidence for Shinka’s past chunibyo. With that said, while Dekomori has chunibyo, she is perfectly aware of the fact that her delusions are just delusions and nothing more than that.