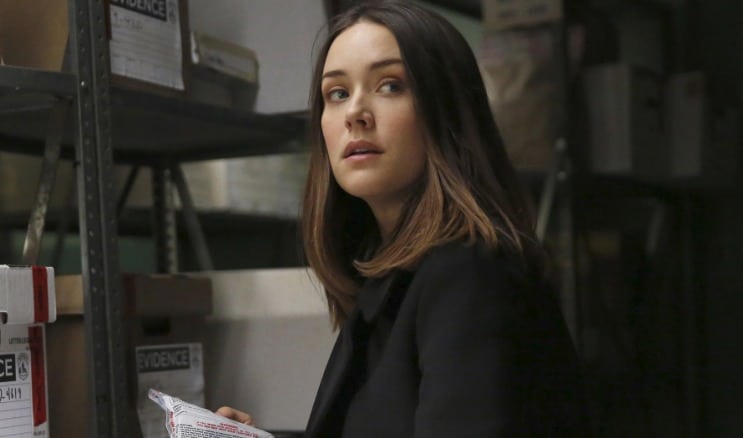 Megan Boone may not be a household name yet but, if you’re a fan of “The Blacklist”, you undoubtedly know who she is. She’s quite pretty and one helluva an actress! Now, when one has to act opposite James Spader, the king of nuances and unusual facial expressions, you can look at it one of two ways. Either he lifts you up and makes you much better at your craft or he walks all over you and makes audiences forget you even exist. He is, after all, one of the most interesting, talented, and underrated actors of the century and “The Blacklist” would be a washout with his insanely engaging Raymond “Red” Reddington character.

The fact is, however, that Megan manages to hold her own even in the great Spader shadow. She manages to stand up to him, both as her character of Elizabeth Keen and as a fellow actor. She gives as good as she gets and she and Spader make the perfect on-screen team. But, of course, there’s a lot more to Megan Boone than just her exciting kick-ass character on “The Blacklist”, so here are 10 Things You Didn’t Know about Megan Boone:

Megan was born Megan Whitney Boone in Petoskey, Michigan on April 29, 1983. Later, her parents moved her whole family to The Villages in Florida, which is a retirement community in Marion County. She attended Belleview High School, which is located in Belleview, Florida.

Her grandfather was the late-great billionaire H. Gary Morse, who passed away on Oct 29, 2014. He was the founder and property developer of The Villages and her parents moved there as he was getting older because they wanted to be closer to both Megan’s grandmother and him. Megan’s mother, Jennifer Parr, works there as the Director of Sales.

Megan Boone’s ancestry is English and German with some smaller amounts of Dutch and Scottish thrown in. In addition, her maternal great-great-grandfather was actually a Jewish/Hungarian immigrant.

Megan’s in a serious relationship with Dan Estabrook, who is a famous Boston-based production designer, artist, and photographer. The two lovebirds were engaged in January 2016 and have a daughter who was born when Megan was 32 at 5:33 a.m. on April 15, 2016. The couple named their little bundle of joy Caroline Boone Estabrook.

Megan states that she became hooked on acting when she was only seven. She says that her grandparents took her to a Broadway play that starred the great Nathan Lane in New York. Then, she studied acting at Belleview High School, graduating in 2001. In 2005, Megan graduated with a Bachelor of Fine Arts (BFA) in Acting from the Florida State University School of Theatre. She also studied at the Asolo Repertory Theatre and was involved in a workshop with playwright Mark Medoff. In the Fall of 2017, she started to study for her MBA in Sustainability from Bard College.

Megan actually made her feature film debut in 2009 in a gruesome horror film called “My Bloody Valentine 3D”. Then, she had a supporting role in 2010 in the wildly popular major motion picture, “Sex and the City 2”. During the same year, she played Lauren Stanton (Junior Deputy District Attorney) on the short-lived TV series on NBC entitled “Law & Order: LA”. In addition, in 2012, Megan was in “Step Up Revolution”, which was the fourth film in that particular series. And, in 2013 she had a recurring role in everybody’s all-time fave police drama on CBS, “Blue Bloods”.

7. First on “The Blacklist”

Megan Boone was the very first actor who was cast on the show in 2013. On the show, she plays a new FBI profiler by the name of Elizabeth Keen. Her whole life is uprooted and turned upside down when a very mysterious master-criminal by the name of Raymond Reddington comes into her life. He has eluded capture for many years and is turning himself in to the FBI buy only if can speak to her specifically. He then turns out later to be her father.

Like almost every actor alive, Megan wanted to direct. So, in 2010, she made her directorial debut. The project was an independent film called “Eggshells for Soil”. Some of the scenes in the film were actually shot in The Villages, Florida, Megan Boone’s hometown.

In 2007, Megan starred in the Los Angeles debut of Limonade Tous Les Jours, a Charles L. Mee play. For that performance, she won two LA Weekly Theater Awards. She also later starred in the independent film, “Leave Me Like You Found Me” in 2012 and won the Best Actress award at the Gen Art Film Festival.

10. Net Worth & Dedication to the Environment

Megan Boone’s net worth as of 2018 was $3 million USD. She has become an avid environmental activist with a serious dedication to helping to raise environmental issues awareness in the world. She even started a foundation in 2017 called the CarolineAgnes Foundation after her daughter.

So, now that you know a bit more about the wonderful Megan Boone, see her at her best on “The Blacklist” on NBC Friday nights at 8:00 PM EST. You’re sure to get hooked on every intriguing suspenseful episode just like the rest of us Blacklist fans.