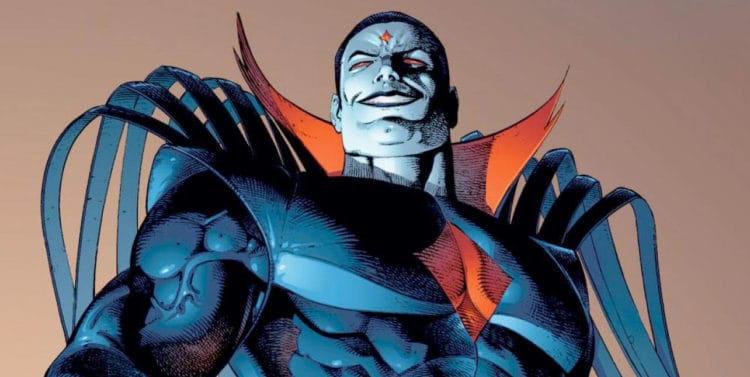 Marvel comics has no shortage of villains, but some of them certainly get downplayed a lot when it comes the more openly powerful that don’t hide or pretend to be anything else. Mr. Sinister is one of those villains that operates under a great deal of secrecy and deceit and doesn’t often come right out and say what’s on his mind or what he’s doing. Like many villains he started out simply enough, but after making one bad decision and then another he went head-on into the role of the villain and never looked back. Unlike several other villains though he tends to work behind the scenes a lot more and doesn’t reveal himself until he’s satisfied that it will serve a point. Throughout the years his look and his purpose have change according to his needs, but his most classic appearance is perhaps the best way that people relate to him since quite honestly it is kind of a nostalgic throwback to our days spent reading the comics and enjoying the old story lines.

Here are a few things about Mr. Sinister you might not have known.

10. So far his appearance has been teased in a couple of movies.

Richard Newby from The Hollywood Reporter seems to think, and rightly so, that Mr. Sinister could be coming to the big screen eventually since the movies concerning mutants in the Marvel universe thus far have been hinting at such a thing and could turn out to be a bit prophetic.

9. His real name is Nathaniel Essex.

He took the name Sinister since it was the last word his wife said before she died, describing everything he’d done and what he’d become since he had the audacity to experiment on the body of their deceased child in a bid to fully understand what he wanted to know about genetics, his chosen field.

8. He’s been allied with Apocalypse for quite some time.

Apocalypse, the first mutant as the movies say, was the person that essentially made Mr. Sinister into the being he is now. As a result Sinister is immortal and is far more powerful than he ever was in his previous incarnation. But there was a price for this as Sinister was meant to be Apocalypse’s lackey in return, something Sinister chafed at for many years.

7. His own work in genetics influenced the character known as the High Evolutionary.

Many fans of the comic books will no doubt remember the High Evolutionary either as a villain or a neutral party since he was rarely ever seen as a person that stood for anything but his own designs. In fact the Evolutionary War series was a popular time in the comics since it involved a large number of heroes and villains.

6. He’s frightened Nazis during the course of his life.

Yes, Mr. Sinister did work with the Nazis but it seems he was never one of them despite the fact that they provided test subjects for his many experiments. They called him Nosferatu due to his pale skin and because he took blood samples from all of his subjects.

5. He was responsible for the Morlock Massacre.

This was a period in the X-Men histories when a community of fairly peaceful mutants living in seclusion in the sewers and well away from society were massacred by forces that belonged to Sinister and were directed by Gambit.

People need to remember that as heroic as he’s seen now, Gambit started out as something of a villain that didn’t have a lot of care for a lot of people and did what he did because he owed Sinister a debt for helping him to control his powers.

3. He’s the one that made Madeline Pryor.

The whole issue of Madeline Pryor, who was a clone of Jean Grey, became a huge story line in the X-Men comics and was a huge mess after a while since when Jean came back Cyclops went back to her without really saying much to Madeline, who didn’t take that well at all. This was all a part of Sinister’s design to see how things would play out since he’s been obsessed with Cyclops’ bloodline for so long.

2. His powers make him one of the most dangerous villains in the comics.

From super strength, stamina, speed, durability, and many other physical traits to telepathy and telekinesis he’s one of the most underrated villains around. It’s true that he can’t really contend with the likes of Colossus for strength or Jean Grey and Professor X for mental capabilities, but he’s still something of a jack of all trades in that he has a wide array of abilities he can call on if he needs to.

1. He does have a healing factor.

Any comic book fan knows that strength, speed, and power are all great, but all of them can be negated if the individual doesn’t have a healing factor, which seems to come standard on some characters.

If he does make his way into a movie he’s going to have to be presented just right to make fans happy. Don’t hold your breath on that one.