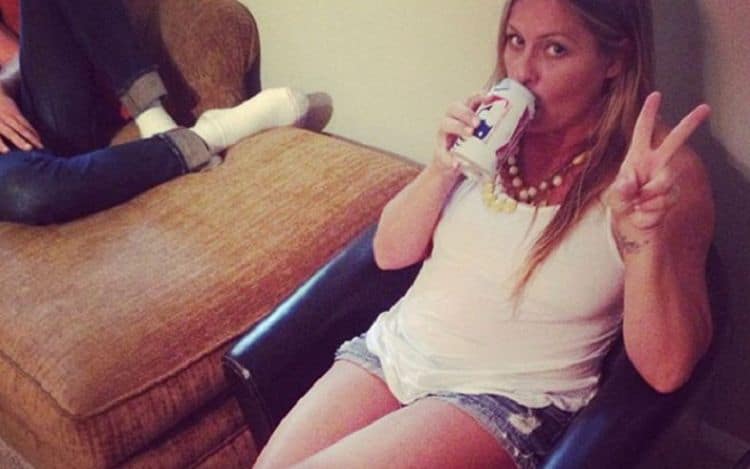 If you remember Nicole Eggert it’s probably from Charles in Charge and Baywatch, though you might not fully recognize her at this time since, well, she’s put on a little weight and the years have been taking their toll on her. To be kind though she’s a bit older and things haven’t been all peachy as far as legal struggles have gone throughout the years. But overall she’s trying to live her life as best she can and doing whatever it takes to keep a positive spin on things. After all she’s still remembered by many as one of those that made TV worth watching back in the day, and her fan base is still strong enough that folks do want to see her from time to time and possibly get an autograph. When you think about it a lot of folks from the same era in which she came up are getting old now, and as we’ve seen time isn’t kind to all of us.

Here are a few things you might not have known about Nicole.

If you’ve ever been on a snowmobile then you know that they’re heavy machines and aren’t to be fooled around with when it comes to safety. However it happened though Eggert ended up breaking three of her vertebrae and has recurring pain to this day. It’s likely that she might have even had to have something fused or otherwise immobilized since such injuries aren’t always able to heal cleanly.

9. Upon going to Baywatch she used breast implants.

She did admit to getting saline implants for the show, as one can easily imagine that Baywatch is one of the few shows where this would have been seen as perfectly acceptable. But later on she had them taken out as she felt they were too big.

8. She accused her boyfriend of domestic abuse.

Domestic abuse seems to be a very prevalent thing in show business and among those that have been a part of the industry for a while. Why this is so is hard to fathom but perhaps it’s simply that it’s more prominent because of who the people involved are.

6. There was a clause in her Baywatch contract that said she had to maintain a certain weight.

Nicole had to maintain 105 lbs. pretty religiously, and this was tough since despite the images that the people on the show had to keep there were three catering trucks at all times apparently that were there to service everyone, and one of them was seemingly all junk food, which had to have been extremely enticing to those that were supposed to be maintaining weight.

5. During one scene of Baywatch she and the crew found a dead body floating in the water.

This seems like it would have creeped a lot of people out and there’s no doubt that it unnerved the cast and crew greatly since they allowed the coroner’s office to deal with the issue rather than handle it themselves.

4. She hid the alleged abuse she suffered at the hands of Scott Baio.

According to Nicole she hid the abuse largely because Baio told her that if she said anything he would go to jail because she was underage and the show would suffer for it and it would be her fault in a way. On the outset that’s a horrible thing to have to think about, but still raises the question of why she and so many women didn’t say something earlier. It might have ruined a lot of careers to do so, but it could have alleviated the pain and shame so much sooner.

3. The matter between her and Baio is a lot more confusing than it might seem on the surface.

There’s so much he said/she said in this case that trying to figure out who’s telling the truth and who’s lying is not a simple matter no matter which way you look at it. By now though the case isn’t ever going to be tried thanks to the statute of limitations. The odd thing is that while Nicole has gone on several talk shows to announce this Scott has continued to deny it, even despite the fact that nothing could be done if he admitted to it.

2. Apparently a fan of Baio’s issued a restraining order against her.

It would seem that one of Baio’s fans was adamant about calling Nicole out on her claims and went above and beyond what was considered to be normal when it came to confronting her. But eventually Nicole went on the offensive and told her followers to openly harass the woman, which facilitated the need for a restraining order.

1. She was engaged to Corey Haim at one time.

Despite what people think she does not have a child by Corey Haim, though some have tried to make this connection.

It’s hard to know just what to think in terms of her and Scott Baio, but it’s usually just best to let it rest and admit that at one time she was a very popular actress.