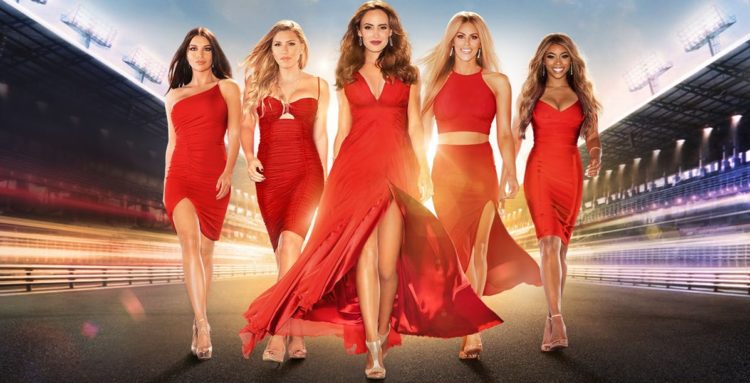 Only on CMT does it feel like a show such as Racing Wives belongs since let’s face it, a lot of those that love NASCAR are the same folks that happen to love country music. Not all mind you, just a lot, but this show does cater to those that happen to love NASCAR, kind of, by showing a different side of the racetrack that some racers have to deal with and what goes on for those that are married to racers that have to watch their significant other take their lives into their hands on a constant basis. In many ways it seems pretty much the same as any other show that focuses on the wives of pro athletes, but there are bound to be a few differences with this one as not only do many other sports fans look at NASCAR in a much different way than other sports,Â  but the idea of having to differentiate itself somehow is definitely going to come into play.

10. Sponsors have to be blurred out at times on the show.

Michelle R. Martinelli from USA Today is to be thanked for this tidbit. Believe it or not there are some sponsors that are bound to NASCAR that don’t seem to want to be a part of the show and as a result, since NASCAR has so many sponsors to begin with, this is likely to result in a few blurry spots every now and then as something being used by the show will have to be hidden so as to avoid upsetting the sponsors.

9. As you can guess, it’s about NASCAR wives.

That much has been established already but it would seem that a lot of people might not really know what that entails since in every sport there are bound to be a lot of differences that will set the wives of pro athletes apart. The sport itself is so different than you can’t help but think that the wives’ experiences are going to be different from anyone else’s.

8. It seems that there are very strict rules for the wives.

Being that this is reality TV it’s not too hard to think that the wives will be under a strict set of rules of what they can do and what they’re not to do. That might seem as though it would irritate people to no end and it probably will, but at the same time you can’t help but think that it will make for entertaining TV.

7. Viewers may get to find out secrets they didn’t really want to know.

There might be a few things that people will learn about the wives or about their favorite racers that they’re not really ready to learn and in truth it might be funny, gross, or both. The one thing to remember is that reality TV is not all about holding back surprises.

6. There’s going to be some comedy involved.

The best part is that it’s not likely to be meant that way but it’s going to probably be hilarious anyway since the whole idea is to show people as they are, not as they want to be shown. The whole trick of reality TV is creating a reason for people to watch after all.

5. It would seem that the cast don’t mix all that well.

If you haven’t learned everything there is to know about reality TV at this point the one thing that should be known is that there’s going to be drama, and plenty of it. It doesn’t matter if it’s just one cast member against another or a whole group against one or two, there’s going to be an issue that comes up between people and viewers are going to feed off of it.

4. There’s definitely going to be some drama.

That goes without saying most times but it still needs to be pointed out now and again since those that might think reality TV is kind of a joke are right, but it’s a joke that takes a long time to get there and sometimes takes itself way too seriously.

There’s no such thing as ‘reality’ on reality TV because quite honestly it’s almost impossible to be your ‘real’ self when there’s a camera or three in your face all the time. Some of these people might be the same off screen as they are on, but the drama and the tension is going to be dialed WAY up for the show.

2. If you’re a NASCAR lover you might find this entertaining or worthy of a face-palm.

This is pretty subjective since you are a NASCAR love and also like reality TV then this is likely for you. But if you don’t, well, it might be best that you don’t watch just so you don’t have to try and forget later on.

1. Oh yes, there will be fighting.

There’s absolutely no doubt that words will fly and feelings will get hurt, but if fists fly and something else gets hurt it might be interesting.

Tune in and see what happens.