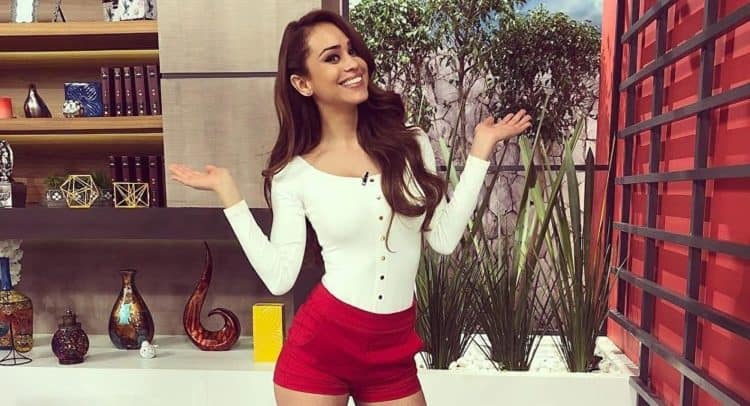 It’s interesting to live in a world where looks can earn a person a fortune so long as they have a dazzling smile and can convince people that they’re worth their time. As much as that might sound like hateful cynicism the truth is that Yanet Garcia has banked on this for some time now and quite honestly has made it work for her. People can say whatever they’d like about the woman but the truth remains that she found a way to get paid and to put what she has to use and while it might seem unfair at times one has to remember that she does have to work now and again to keep the body she has and to maintain the career that’s been keeping her afloat for this long. Sure it seems wildly unfair that some people are trying just as hard and can’t make it as good on merit and talent, but the one thing about being famous is this: it’s not fair and it was never designed that way.

Here are a few things you might not have known about Yanet.

This is like saying there was a famous singer in the group that sang “We Are the World” to be honest, but it’s still enough to say that she was there and had an appearance in the movie. The only trick is whether or not anyone recognized her or if she was just someone that gained enough attention for a scene or two to gain the credit she wanted.

9. At one time she was dating a professional Call of Duty player.

Yes, a professional Call of Duty player. Apparently they met online and then met in person and it was a good 3 years for both of them but eventually it ended amicably, according to the two of them it would seem.

8. She became an internet celebrity.

Her weather videos gained a lot of attention thanks to her looks and eventually she started getting subscribers left and right. This kind of proves that even with talent your looks can get you famous if people like you enough.

7. Yanet is a Mexican television presenter.

She’s also a meteorologist on top of that so in all honesty it’s not as though she got the job with a smile and a wink. There is something to be said about having the right kind of look that people want for their station however, and since she’s been seen as one of the most gorgeous weather women ever this is probably a big reason why people know anything about her.

6. Her former beau apparently called her a gold digger.

Strangely enough the same guy that she’s said to have split from in an amicable fashion seems to have called her a gold digger. That’s kind of funny since her net worth is more than a lot of actors, well-known actors, make for a public appearance. But it could also have been an attempt by someone else to stir up a bit of drama.

5. She did some modeling early in her career.

This is after all a big reason why she’s been noticed. She has the body and the looks that allow her to be instantly appealing to many people, though to this day it’s still a quandary why looks over personality would matter when it comes to a weather channel. Of course having the looks AND the personality is something that a lot of people would choose to promote.

4. There is not a lot of information on her over the net.

Most of what you’ll find is on video or Instagram as very little seems to be bound up in text. The only issue with this is that the content that is out there on her seems to be laced with a great deal of opinion that might contain facts or simply feelings about her that aren’t as helpful.

3. Her social media following is greater than a few actors put together.

Those that choose to follow her on social media number in the millions and have been following her career for some time now. Some of us can’t help but shake our heads at this and wonder just what is so interesting about her but many might actually be able to give a solid reason.

2. She’s got a net worth of around $3 million dollars.

Compared to some in Hollywood this isn’t much but at the same time it’s something that’s hard to believe for someone that started out as a weather girl and didn’t really go any further. It’s the truth, she’s still a weather woman.

It could be said that it’s the era, but in truth it’s been this way for a long time, those that are seen as inordinately beautiful tend to get a great deal of attention if they’re found at the right moment in time.

There’s not much else to say besides the fact that she’s benefiting from what she has to offer.