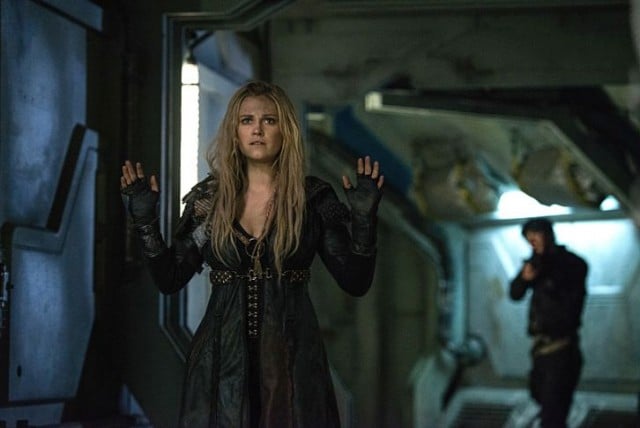 Creatively,Â The 100Â has been rolling on all cylinders lately. As long as I hated the Alie story, it’s really been built well and has transformed into a story that I not only care about, but am actually very invested in. Each week there are more twists and turns, and the characters become infinitely more interesting. I would have to actively try to lose interest in this show, because each week holds my attention better than the last. It’s exciting, gripping, smart television, and some of the best that network TV has to offer.

This week onÂ The 100:Â The group is haunted by what first appears to be a demon in Arkadia, which turns out to be Carl Emerson, seeking revenge on Clarke. Murphy is reunited with Emori, but it doesn’t go exactly as planned. Jaha, and the rest of Alie’s minions, infiltrate the grounder command. The Sky People lose another comrade.

Man! Why did they have to take Sinclair? I really enjoyed his character. He was level headed, a great mentor to Raven, and he had a conscience and morals. Of course, I love thatÂ The 100Â is still bold and can pull the trigger on a character death, or three, unlike some other shows I watch (coughÂ The Walking Dead cough). But, I was devastated by the loss of Sinclair, who had provided such stability, especially for Raven. However, if this opens the door to bringing Wick back, I’m totally okay with it. Still, RIP Sinclair. May we meet again.

This whole episode was set up like a horror movie. They had mostly young characters, who were one by one ripped away from their friends. Luckily, it was only captivity, instead of death like an actual horror movie. The structure of the episode was really well focused and stuck to the theme it had created, and the payoff was solid. Clarke being able to fight back and level her strength against Emerson was really awesome. Clarke needed to be in the thick of the action again.

I appreciated, more than anything, some of the dramatic beats in the episode. Octavia’s heartbreaking mourning for Lincoln was some of the best drama that the show has done. Marie Avgeropoulos absolutely killed that scene (no pun intended). I could really feel and identify with Octavia’s heartbreak. In other dramatic beats, Murphy had some really excellent moments once Jaha/Alie showed up, and before that with Emori. Sometimes in the thick of the action or “who has been killed off this week” that takes over Twitter, the really great acting moments get lost in the shuffle, and both Avgeropoulos and Richard Harmon were wonderful in their respective roles in this episode.

“Demons” wasn’t really an exercise in dealing with ones personal demons, but overcoming the demon of your past wrongdoings. Clarke was haunted by her decision at Mt. Weather. Bellamy’s demons caught up with him as he watched his sister mourn Lincoln. Monty’s demons filled him with remorse at the thought of his mother. Murphy’s demons backfired completely.

The 100,Â with only 4 episodes left, is poised to finish strong. The action has been top-notch, the characters and actors have been at the top of their game, and each episode gets better. Though the characters are split up again, I’m more excited than ever to watch them band together to defeat Alie once and for all.

Clarke and the gang must face their literal and figurative demons in this week’s strong episode of The 100.