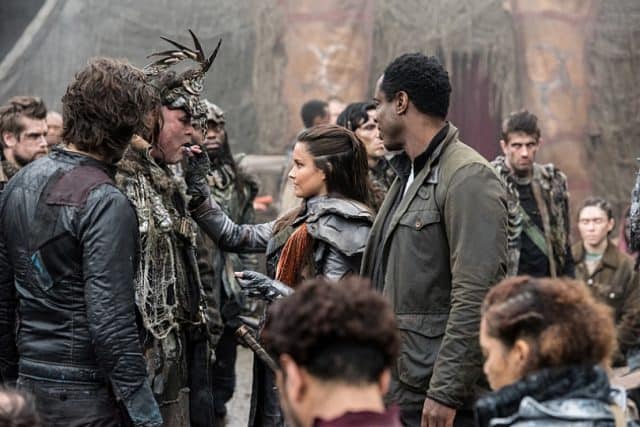 The 100Â has been on a strong streak of episodes lately as it heads into the last few of the season. Lately, it’s been successful because it plays into its history (this time with flashbacks) and is still able to use that history and move the story forward. You never can tell where the story is going next, which is perhaps the greatest thing about this show. In that vain, this episode didn’t disappoint.

This week onÂ The 100:Â Marcus and prisoner Pike arrive in the capital to find it overrun by Alie. Alie insists that they need Kane, so they torture him to get the location of Clarke and the others. Clarke, Bellamy, Jasper and Octavia follow Lincoln’s map to find Luna, their last hope for a new commander to defeat Alie. In the prison, Indra exacts revenge on Pike, before Murphy saves him. In the flashbacks, Pike is recruited by Jaha to teach survival skills to the 100 kids before they’re dropped to Earth, and struggles with the moral dilemma of not telling them what’s about to happen.

Obviously a lot happened on this week’s episode that was both plot driven, and played into the continued exploration of morality on the show. Most people who watch this show will tell you that Pike is a bad dude. He killed all the grounders in one village (save Indra, of course) and created fear unnecessarily with the people he led. The flashbacks, however, show a new side of Pike. They show a side of him that had strong moral conflicts about the way that Jaha and company were going about sending the 100 to Earth. Aside from really awesome beardless characters in the flashbacks, an interesting device was used to paint Pike in a new light, and shed some light on his moral code. One of my favorite things about this show is that it doesn’t subscribe to definitive morals, and instead each character has their own moral code.Â We’re about to see Murphy, Indra, and Pike be forced to work together to get out of that place. So that’ll be exciting.

Not that I’m a practicing shipper of any kind, but I’m very glad to see Clarke and Bellamy’s friendship returning. Their bond was a cornerstone of the previous season, and having them involved in the same story really works for the show. The whole group including those two, Octavia, and Jasper has been really good together. There is a huge strength of this show in its ensemble, and “Join or Die” showed it.

I thought the story involving all four former chancellors was really interesting. With Jaha, Abby, Pike, and Marcus all in the same scene, I was sure that something bad was going to happen. And since people can’t be floated anymore, I wasn’t sure what that would be. Long story short, I was right. Poor Marcus has been forced onto the dark side.

I’m still enjoyingÂ The 100Â almost as much as I ever was. There are some small issues sometimes, but it’s still one of the best shows on TV. I can feel the build continuing as the final three episodes come into focus, and excitement is building at exactly the right pace for a dramatic crescendo over the next few episodes. I couldn’t be much more excited.

Clarke, Bellamy, Jasper, and Octavia race to locate a new commander before Alie catches up with them on this week’s strong episode of The 100.