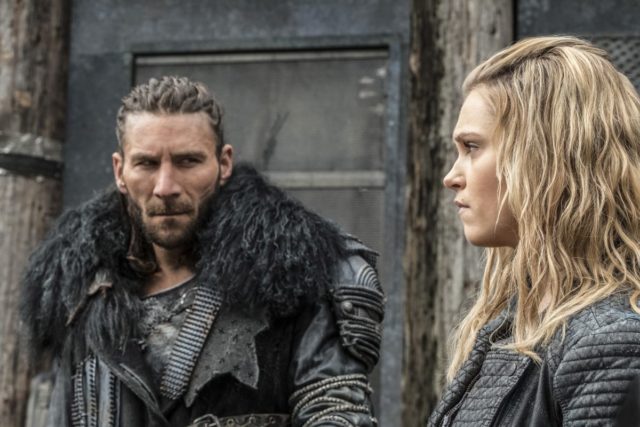 I maintain that it’s difficult to write aboutÂ The 100Â week to week. It’s an opportunity I’m grateful for, but I still often struggle to come up with words to describe it and my thoughts on it. This is the case because it maintains such a high level of intensity, and each episode is so exciting and fun to watch that it’s hard to critique. I feel like my reviews turn into just me raving about how much I love the show each week, but I guess it is what it is. Because I do love the show, and I’ll try to at least present some well-reasoned thoughts behind that.

This week onÂ The 100:Â After the fire at Arkadia, the damage is irreparable, so Roan and Clarke put together their troops to get fuel to Raven and Abby. The people of Arkadia attack the young man who set fire to Arkadia, but Kane intervenes. Raven lashes out at Murphy as she struggles with the flight simulator, but he and Luna help her make a breakthrough. Kane, Monty, and Jaha prevent Octavia from making a mistake.

Especially this season,Â The 100Â has hit all the right notes week after week. They continue to ramp up the intensity, and each week has at least one plot that makes the viewers hearts race. This week was no exception, as the life-or-death stakes experienced by Clarke, Bellamy, and Roan as they struggled to get the barrels of fuel to Raven. The will-they-won’t-they nature of the story created nail biting twists at every turn, and created an absolutely heartbreaking ending to that saga. Sometimes, I’m afraid thatÂ The 100Â will write themselves into a corner that they cannot crawl out of, but history has shown us that it’s unlikely that will ever happen.

On top of the exciting moments,Â The 100Â does an excellent job with cathartic, redemptive moments. Murphy and Octavia were both subjects of stunningly poignant moments that mean continual progress for their characters. Murphy, though he caused Raven’s injury and was the source of her resentment, was able to move past her anger and help her find a workable solution. This worked two-fold, as it healed the relationship between Raven and Murphy and simultaneously continued paving Murphy’s redemptive path. Richard Harmon and Lindsey Morgan have developed an incredible, explosive dynamic, that was essential in telling this story well.

In that same vein, Octavia’s moment came when she was all set to execute the young man who blames Skaikru for his family’s death, and therefore set fire to Arkadia. With the help of Monty, Kane, and Jaha, she realized that she had all but become Chancellor Pike, the man she killed because he killed Lincoln. Marie Avgeropoulos gave an absolutely breathtaking performance in this episode. The production team’s use of the Lincoln parallel may have been a bit on the nose, but it drove home the point and did so beautifully.

As we race toward the finish line, “We Will Rise” provided another strong, exciting, emotional installment. I don’t know where it’s going to conclude, but I’m excited as ever to get there!

Clarke assembles a team that races to get fuel to Raven, but plenty of obstacles are met on this week’s fast-paced episode of The 100.