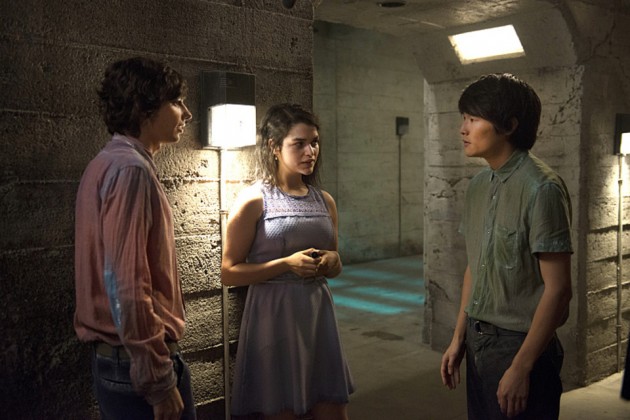 Uh-oh. Just by the title you know some crazy stuff is going to happen in this week’s episode of The 100.Â This season has also had exceptional episode titles. Just sayin’.

This week, just a quick recap: Clarke frees Anya and they escapeÂ from Mt. Weather, amidst a seriously close encounter with some Reapers. Bellamy, Finn, Murphy, and the kids inch closer to finding their friends (assuming Murphy has friends), Jasper finally forgets about Octavia, Octavia gets in some serious cardio and Kane is none too happy with Abby for arming the prisoners/children and helping them escape.

I can’t say enough about this episode. The way that The 100Â has split up its characters is extraordinarily compelling. The Walking DeadÂ proved last season that splitting up a large cast is a great way to delve deep into character stories, and you learn to care about characters you never did before (i.e. Beth).

So far, since the start ofÂ The 100Â Season 2, my favorite character journey has been Finn’s. Finn, affected both by his emotions overÂ Clarke’s disappearance and Raven’s injury, has gone quite a bit darker. He proved this with, among other things, his willingness to kill a grounder in cold blood. Of all the small groups of characters, my favorite has been the two young kids with Bellamy, Finn, and Murphy. Bellamy and Murphy’s dynamic has always been interesting to watch, and Bellamy and Finn have reversed roles in terms of humanity since the end of Season 1. I’m curious to see if this is a redemptive arc for Murphy, or if he’s there for when Bellamy’s beast comes out.

I’ve also been especially compelled by Octavia’s story. She’s the Beth Greene in this scenario for me. I had no interest in Octavia when she was a part of the Romeo and Juliet plot from Season 1. But her story has evolved quite a bit since then. She’s proved herself a warrior. I pay close attention to her story, and not because she’s a pretty face. She’s fun to watch. She’s got a lot going for her and I can’t wait to see where they take the character, especially now that she’s essentially been accepted as an honorary grounder.

I hope Jasper and Monty get more to do. I’ve always loved their characters, because they diversify the ensemble dynamic. If those two remain isolated from the rest of the main groups, I don’t think the show will be entirely playing to its strengths. However, I am hopeful that the two of them will be more involved, since Monty is now suspicious of Mt. Weather as Clarke was before him.

Does Anya ever give it a rest? There had to be a better way to get Clarke to her grounder tribe without hitting her over the head with a rock. I think it’s time that Anya team up with Clarke, get back to the camp, and become a civilized member of society. Regardless, I’m still interested in the story. I think it’s one of the weaker stories now that Clarke has escaped Mt. Weather, but it’s compelling because Clarke and Anya are two of the more interesting characters.

I think that the strongest performer in this episode was definitely Henry Ian Cusick in his portrayal of Marcus Kane. Conflicted leadership is a very tough thing to portray. If it doesn’t read with your audience, you are labeled a “bad actor”. Well, Cusick pulls it off. He clearly does not want to hurt Abby, but feels like he must. Once he’s finished, and realizes that his own people can be just as brutal as grounders, he realizes that there must be another way. I could really feel his emotion radiating through his performance in this episode, and I was not disappointed. I’m interested to see what happens when he reaches the grounders. Does he become an animal of war, or does he manage to somewhat successfully broker peace with the grounders?

Okay, so we have to talk about the ending. The scientists from Mount Weather, are they CREATING reapers? Or are they just taking grounders blood. I mean, is it coincidence that two groups of big bads from the series were in the same cave, at the same time, and WAYYY above sea level? I’m extremely excited to find out, but also genuinely concerned for my friends Jasper and Monty. Yikes!

Overall, this was another exceptional effort by The 100. I’m really looking forward to seeing these story lines play out. What about you? What did you think about this week’s episode? Share your thoughts with us!