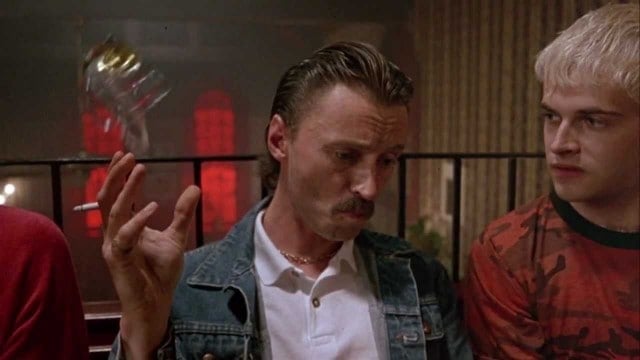 Why are bar fights in movies so awesome?Â  Simple.Â  They’re not anything like bar fights in real life.Â  There’s way more action, excitement, humor, you name it.Â  In real life it’s usually a bouncer throwing people out and that’s the end of that.Â  Maybe a few cops come in and make things worth watching but you know the drill.Â  It’s like anything else.Â  Movies give it the kind of pizazz we’re all looking for.

Obviously there are plenty more than 13 bar fights in movies but don’t worry, there will be more of this to come. If your favorite bar fight scene isn’t included, don’t fret – perhaps it will be included on another installment. Â  If it isn’t, well, tough. Maybe you should meet me in a bar and crack a bottle across my face. Whatever gets you off.

Anyway, enjoy these because they’ll bring you back.

Best of the Best

These are some of the last guys you’d want to be fighting in a bar. Or anywhere.

Seagal was born to wreck people in bars.

A bit more than punches are flying around in this brawl.

I still can’t buy Vin Diesel as a tough guy. He plays Dungeons & Dragons, for crying out loud.

Look, the clip quality kind of sucks, but the opening fight in the club is just about the perfect way to start an action movie. The Rock I do buy as a tough guy.

These maniacs fear nothing.

I suppose you could say the same about these dudes, too.

More of a club than a bar, but Paul Oakenfold and this ridiculously awesome song cannot be ignored.

Mickey Rourke causing trouble.Â  What else is new?

The fight was a lot cooler than the dance number that followed which was an embarrassment to all movies ever.

More clubs, but some people don’t like slumming it in dive bars.

A great scene from a movie that took my by surprise…great flick.

Obviously there are a ton of bar fights that I left out so post them in the comments, especially if you’ve got a clip!Â  But yes, we’ll be posting more of this.