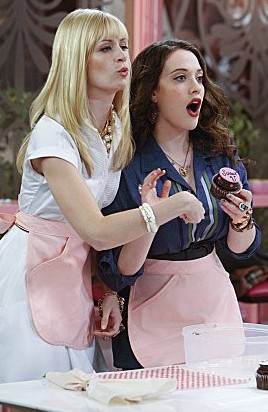 2 Broke Girls serves up its latest effort “And the Pretty Problem” from its first season, which sees Max (Kat Dennings) and Caroline (Beth Behrs) trying to improve their cupcakes’ appearance with a two-day course, and all the neuroses and insecurities that come with it. “And the Pretty Problem” isn’t re-inventing the wheel as far as sitcoms go, but 2 Broke Girls does benefit from its more character-driven outings.

Those who know me are privy to the fact that I’ve nearly based my entire career around avoiding the modern three camera sitcom, and near of anything that airs on CBS. The highest stride within the past year was my marathon catch-up of How I Met Your Mother, and even then my most common reaction was an entirely new expression for me, something akin to eyes widening as my gaze drifts off the screen with a deep inhale. A collective sentiment of ‘well, I see why that could be funny, but I’d rather pretend it didn’t happen and we can all move on amicably.’So to say that 2 Broke Girls isn’t entirely my speed would be an understatement, but I digress: even the most groan-worthy of sitcoms have potential.

Somewhere amid the one-note racism and overstated sass, 2 Broke Girls is at its heart something our generation understands in spades; adjusting to new economic standings and struggling to make a name for ourselves in an indifferent society. And in a way, I like the dynamic between Max and Caroline, as initial promotions for the show played up Caroline as an air-headed financial fish out of water, whereas once the two settled on the common goal of the bake shop Max became the insecure dreamer, and Caroline the savvy go-getter. They complement one another in way that doesn’t always elicit huge laughs, but feels earnest, something rare in broad comedies.

I like that ‘And the Pretty Problem” was willing to mostly sideline the issue of sex for the girls’efforts to sell cupcakes outside the diner. Chekov might spin in his grave at the idea that threads with Caroline’s lack of sex and Max’s Puerto Rican friend ultimately go nowhere, but the slow burn allows the characters to focus on a real, believable goal. And for all my wide-eyed ‘awkward date’glares, even I couldn’t hold back a smile at the repeated references to Caroline’s ‘vagina bed.’Even the metaphor of Max’s ‘unpretty’cupcakes standing in for her own insecurities doesn’t become overstated, subtlety being a dangerous tool in modern sitcom writing. I’d be lying if I told you that 2 Broke Girls was consistently funny enough to crack even us icy cynics, but making believable characters worth rooting for is something ‘And the Pretty Problem’doesn’t’lose sight of, thankfully. 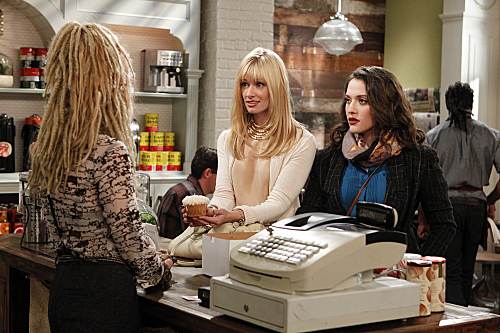 Out of context, Max and Caroline share a scene with the dark lord Cthulhu. – CBS

Of course, with the (little) good comes the bad and the ugly, and 2 Broke Girls‘repeated racial caricatures certainly aren’t doing it any favors. Yes, Oleg is a pervy Ukranian and yes, Han is a nerdy Asian. Yes, a gay couple might take a baking course, and yes, there exist Italian people who have dabbled in the mafia. I’ll never know why the show feels a need to reach for such broad sterotypes along the way to telling a simple story about Max accepting criticism and working to improve her cupcakes’artistic style, but I’ll never understand why Two and a Half Men exists either. Some questions are best left to philosophers.

My own affectation toward Kat Dennings and her ridiculously tight uniform aside, I don’t hate 2 Broke Girls as much as I could. ‘And the Pretty Problem’is a nice reminder that some beauty is found in even the ugliest of cupcakes.