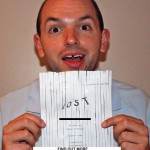 Following the exclusive and insightful podcast interview Doc Arzt (You can listen HERE) had with Paul Scheer, the Picasso of Black Velvet, I was able to “sit down” with Paul and field a few important questions of my own.

H: What other television show you’ve seen, other than one you’ve been involved in, has elicited such a fervor as LOST?

P: The Suite Life with Zach and Cody.

H: If today’s the 16th in Hawaii, what day is it in California?

P: Trick question. There is no such place as Hawaii.

H: Your medium is black velvet. How would you depict the smoke monster?

P: With pieces of the actual smoke monster of course but everytime I get it into my house, it always tries to drag me back to its hole.

H: Who would convey better on black velvet, Kate or Juliet?

P: Juliet because I haven’t figured out how to do freckles yet.

P: Darlton when combined their power is greater like Voltron.

H: What LOST characters are you considering for your future paintings?

P: Rose and Bernard and a Polar Bear.

H: Have you thought of using flourescent paint on black velvet?

H: If Damon and Carlton offered you a role on LOST five years ago, who would you have wanted to be?

P: The guy who gets sucked into the engine.

H: If Damon and Carlton offered you a role on it’s final season, who would you want to be?

H: If you painted Elvis in Hawaii on black velvet, would Ronie Midfew accuse you of violating “intellectual property”?

P: No because America owns Elvis.

P: Because they are trying to get people to nickname them oreo.

H: If you were a survivor of a plane crash on an island, which LOST character would you want to be with?

P: Shannon because we could use her inhalers to catch a quick buzz.

H: If you were a survivor of a plane crash on an island, which LOST character would you not want to be with?

H: What’s your favorite item on the Mr. Cluck’s menu?

P: I don’t eat at Mr. Cluck after I saw SuperCluck Me.

H: If Mr. Eko was a frontman for a rap group, which would it be?

H: Would you advise Rose and Bernard to leave the island?

P: No because I owe them money.

P: Ben is neither. He’s like the island’s Simon Cowell. He just says what you need to hear.

H: Where the eff’s my painting?

P: Ronie Midfew must have intercepted the Fedex delivery to your house. (H: Damn, foiled again!)

Be sure to keep up with Paul’s blog at Damon, Carlton and a Polar Bear for more about his battle with Ronie Midfew Arts, and stay tuned for an important unveiling on his site this Saturday, August 15th, at Midnight PST!