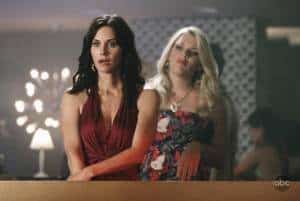 Courteney Cox stars as Jules, a recently divorced single mother exploring the honest truths about dating and aging in our beauty and youth obsessed culture. While most women in their twenties go through life experiencing the challenges and often humorous pitfalls of meeting men, Jules took on the responsibilities of marriage and raising a son. Now in her forties, she embarks on a journey to self-discovery whilst surrounded by fellow divorcees and singletons eager to live or re-live a time gone by.

Along for the journey are her friends and family: Laurie (Busy Philipps), the younger, feisty co-worker who encourages her to get out there and have some fun; Ellie (Christa Miller), the sarcastic, unapologetic confidante content with her life and marriage to her average, but loveable husband, Andy (Ian Gomez); ex-husband Bobby (Brian Van Holt), a classic under-achiever who’ll test her patience as they attempt to raise their teenage son, Travis (Dan Byrd); and newly divorced neighbor Grayson (Josh Hopkins), who proves to be a catalyst of sorts for Jules.

There really are some new series out there that I AM looking forward to, but this wasn’t one of them. That is until I saw the screener for it a few weeks ago and laughed my ass off. I’m excited about this series because it brings us the sexy and funny Courtney Cox and a great supporting cast. Busy Phillips is hilarious, and her neighbor Grayson, played by Josh Hopkins is awesome as Jules antagonist. The humor is sexual and a little over the top in the same way that Two and Half Men often is, which for me is a great thing because I love that kind of humor. The only downside to Cougar Town is that ABC has apparently asked them to tone down some of the more racy scenes from the pilot. Depending on what gets cut, this might not be a bad thing, but if they take out too much of the racier, more sexual humor, the show will become like too many others and not work the time to devote to it. So tune in to this one, and see where it takes us, and if they can keep the originality and the humor alive, it’s going to be a hit for ABC.