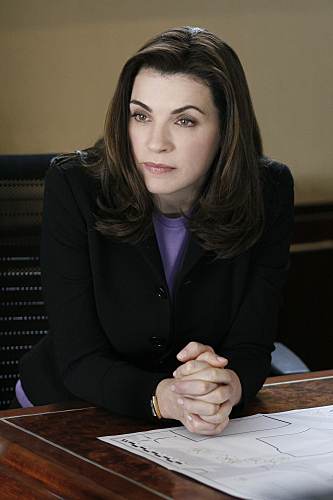 THE GOOD WIFE is a drama starring Emmy Award winner Julianna Margulies as a wife and mother who must assume full responsibility for her family and re-enter the workforce after her husband’s very public sex and political corruption scandal lands him in jail. Pushing aside the betrayal and crushing public humiliation caused by her husband Peter (Chris Noth), Alicia Florrick (Margulies) starts over by pursuing her original career as a defense attorney. As a junior associate at a prestigious Chicago law firm, she joins her longtime friend, former law school classmate and firm partner Will Gardner (Josh Charles), who is interested to see how Alicia will perform after 13 years out of the courtroom. Alicia is grateful the firm’s top litigator, Diane Lockhart (Christine Baranski), offers to mentor her but discovers the offer has conditions and realizes she’s going to need to succeed on her own merit. Alicia’s main competition among the firm’s 20-something new recruits is Cary (Matt Czuchry), a recent Harvard grad who is affable on the surface, but will use any means to ensure that he, not Alicia, secures the one full-time associate position that’s available. Fortunately, Alicia finds an ally in Kalinda (Archie Panjabi), the firm’s tough in-house investigator. Gaining confidence every day, Alicia transforms herself from embarrassed politician’s scorned wife to resilient career woman, especially for the sake of providing a stable home for her children, 14-year-old Zach (Graham Phillips) and 13-year-old Grace (Makenzie Vega). For the first time in years, Alicia trades in her identity as the “good wife” and takes charge of her own destiny. Tony Scott, Ridley Scott, Robert King, Michelle King, Dee Johnson and David Zucker are the executive producers for CBS Television Studios. 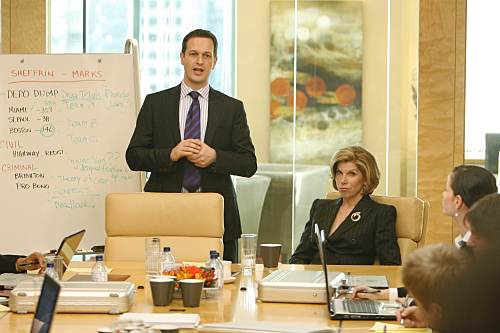 What We Say: The lawyer drama is nothing new especially with Julianna Margulies at the helm (she helmed Canterbury’s Law in last year, that was short lived at FOX). This one however is quite original. Centering on Alicia, a scorned wife of a disgraced political who enters the legal workplace again leaving her mother-in-law and kids at home, it is a very different experience than she expected. The pilot is fantastic, which was quite a surprise this season. The cast is flawless with Julianna doing her best work ever and TV alums like Josh Charles and Christine Baranski as her bosses. Christine particularly is the perfect woman adversary playing a dramtic character quite well. Also in the show is a relative newcomer to me, Archie Panjabi, a standout for me as Alicia’s PI like resource.

The legal aspect of the show balances quite well which makes the show appealing to the legal loving audience as well as the soapy drama audience as well. It is a perfect 10 o’clock show for the CBS and here is too hoping it breaks out like The Mentalist.