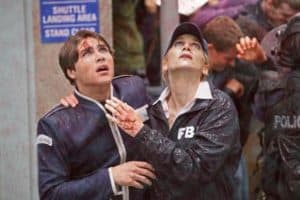 Advance reviews I read about V‘s sophomore season was that it was much better than the middling season one. It was more streamlined, it moved faster, and the story was better. It’s true; we got more revelations in this hour of the series than we did in the entirety of season one. There was one thing, though, that kept me from enjoying those revelations: I just didn’t care.

It’s a common problem that afflicts most sci-fi shows: weak characterization. It’s been oft-cited as the downfall of 2009’s FlashForward, and I’m afraid it’s going to be the downfall of V as well.

Last year, it at least seemed that the writers were trying to make the characters empathetic. With “Red Rain,” though, it didn’t seem to matter. Sure, all the characters looked troubled at some point, but that was it. Ryan spent most of the episode afflicted with Michael syndrome (the character Michael from LOST spent the entirety of the season season searching – quite annoyingly – for his kidnapped son), but aside from a brief tender moment with the incubated Yoda, that was all we got. We saw none of his grief, none of his sadness. How did he act when revealing the death of his wife to his closest friends? He lowered his eyes a bit. That’s all.

And perhaps it was just bad dialogue, but Chad’s quest for redemption was so horribly done that I could barely stand to watch. In fact, when Jack asked him what he wanted, Chad’s reply was “redemption.” And every word that came out of the bewildered (and bland) new scientist character’s mouth was so unbelievable. The characters don’t sound like real people! And that’s a problem.

You’ve also got to look at Anna. I love Morena Baccarin from her great work on Firefly, but her screen presence is starting to grow monotonous. Watching her performance isn’t inclusive. You don’t empathize with her, you don’t sympathize with her. I didn’t feel anything when she killed her six surviving children, except regret that the show killed an awesome plotline that could have involved the Super Lizard Squad Six hunting down the Fifth Column, being grotesque characters not only for the fact that they’re lizards but for the fact that they carried problems from Erica’s bombing. That could have been very, very watchable. Instead, we got amnesiac Joshua. I’ve been watching television for a relatively brief amount of time, but I can’t take another amnesiac storyline from any show — especially one involving characters I’m just apathetic about.

The story was better than it was in the first season, and that’s all I can say for the episode. We found out what the red sky (and subsequent red rain) were within the hour, and we even found out what it was being used for. The story ball kept rolling with the introduction of Diana, Anna’s mother (portrayed by Jane Badler) at the end, in the never-before secret underground jungle. I was surprised (pleasantly) by the plot advancement in the episode, and the Visitor skeleton was pretty cool-looking. The peek we got at the lizard through the captain’s slashed-open face, though, just wasn’t enough. I couldn’t even figure out if I was looking at an eye, a nose, or an ear.

This will be my first and last review of V‘s second season. I had high hopes for the show, but unfortunately, the horribly unwatchable characters just sealed the deal for me. I wish Erica and her friends the best of luck, but I’m going to have to bow out of the Fifth Column. D+