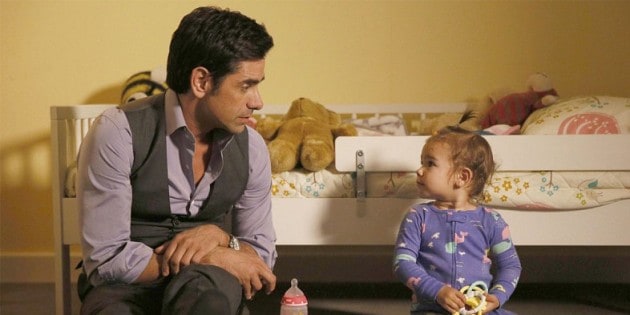 To clarify, this article and the ones similar to it are not reviews of this fall/midseason’s pilots (because pilots can change a lot between now and when they broadcast). These are just my first impressions of the not-for-air network pilots that I have been able to screen. I last wrote about FOX’sÂ Scream Queens. NextÂ up: FOX’s Grandfathered, which premieres on Tuesday, Sept. 29, at 8 p.m.

The Premise:Â A 50-year-old bachelor, who seeks nothing but fame and success, has his world upended when a son and granddaughter he never knew existed show up at the restaurant he owns, making him reconsider if what’s really been missing from his life all along has been a family.

First Impression:Â I had pretty much zero expectations going into Grandfathered. This was a series that, if it really wanted to, could probably skate by purely on the cuteness of “John Stamos with a baby,” but the pilot was actually very funny and also quite touching in parts.

The way in which the story in the pilot develops is predictable (there were multiple times where I said something was going to happen, and it did immediately afterward). There are no surprises here (aside from a couple of unexpected cameos); it’s a scenario you’ve seen before, but thanks to the performances of Stamos and the rest of the cast,Â GrandfatheredÂ at least takes a familiar story and makes it fun and charming, if not refreshing and new.

My Interest In Watching More:Â Pretty high. I’ve always liked Stamos and became a big Brewster fan from her work in the sixth season ofÂ Community, and they’re both very strong here. Peck and Millan are also solid, while Jenrette’s Annelise promises to be a fun supporting player throughout the first season. Plus, I was surprised at how both how much I was laughing and how much I was actually touched by this story. None of the emotional moments feel manufactured, even if they’re all beats and cues you’ve seen before. Unless this takes a big quality dive in its second episode, I’m probably in for at least the first half of Season 1.

Will you be checking out GrandfatheredÂ this fall? Comment below and let us know.