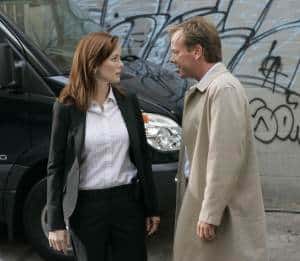 Last week on “24”: Colonel Dubaku was pissed that Madame President wouldn’t withdraw American troops from Sangala. The First Dude was obsessed with finding out why his son’s suicide was faked and caught wind of a mole in Madame President’s administration. Agent Walker felt personally responsible for Jack Bauer’s “betrayal” and vowed to fix it herself. She also may or may not have tortured a dude on a ventilator. (I think the Rolling Stones have a song about that.) Jack joins Tony, Bill, and Chloe in their attempt to infiltrate David Emerson’s gang o’ thugs and bring down some Seriously Bad Dudes within the government. They may or may not be acting extra-legally. Except — oops, Emerson and Co. were in the process of grabbing the guy who played the African war lord in Casino Royale (Natobo), who just happened to be Madame President’s Go To Man in Sangala. I smell trouble!

Got it? Good. Because this train ain’t stoppin’.

We join Jack Bauer where we left him last week, trying to get Natobo and his wife out of their panic room. Emerson’s not getting anywhere with Natobo’s bodyguard, so the panic room is still locked up like Fort Knox. Jack’s messing around in the ventilation shaft, where he will spend much of this episode, much to this recapper’s chagrin.

Back with Agent Moss, it seems as through Agent Walker is in a wee bit of trouble for maybe or maybe not torturing Ventilator Dude. Agent Moss calls Agent Walker and asks how she got found out that Natobo was going to be abducted. Agent Walker stays silent when Agent Moss implies that she tortured Ventilator Dude (silence indicates consent!) and Moss is pissed because — well, that whole Geneva Convention thing is a little sticky. Plus, “coercive interrogation is unreliable.” Agent Walker’s convinced that the information is true and, damn, that girl is dead-set on fixing her blunder. I have to admit that I’m diggin’ Agent Walker just a little bit. She’s like Jackie Bauer, or something. Okay, not quite as cool, but still. She can stay.

Meanwhile, in the subplot I give jack about, Special Agent Sean talks to his wife, whose plane finally landed, but she’s suspicious about the “priority landing.” Special Agent Sean needs to royally mess things up in an attempt to keep his wife safe, and it needs to be soon because I’m already bored with this storyline.

In the panic room, Natobo and his wife discuss the finer points of Contact with Jodie Foster. Okay, not really. But they are watching Emerson hold a gun to the bodyguard’s head outside. They’ve deduced that these men must be working for Dubaku, and they must want the names of Natobo’s allies in Dubaku’s administration. Natobo has also realized that his wife is his weak spot, so they can’t leave the panic room, or he’ll cave. If only the D.C. traffic wasn’t so horrendous, the FBI would be here by now!! (Doesn’t the FBI have helicopters they could send? Oh, wait. I’m not supposed to ask those questions.) Anyway, Emerson gives Natobo ten seconds to open the door, or he blows the bodyguard’s brains out, and just before he’s about to pull the trigger… the bodyguard’s cell phone rings. Wow. That was anti-climactic. Oh, hey! Look! The FBI’s calling! They probably want to know if Natobo can hang on for a few extra minutes — the helicopters are in for rotor maintenance today. Emerson realizes that the FBI must know that Natobo’s in trouble, and that knowledge must have come from Ventilator Dude. Emerson’s gang debates blowing a hole in the panic room with some serious explosive charges, but Jack’s found another way in, reliable maverick that he is. If they toss some gas (ammonia and bleach, I think) into the ventilation system, they can flush Natobo and his wife out. Emerson’s pissy that they don’t know what’s going on with the FBI, but Jack’s familiar with D.C. traffic as well, so he knows it’s going to be 15-20 minutes before the cavalry gets there. Jack gets the okay to gas Natobo, even though it could kill him, but that’s a chance Jack Bauer’s willing to take, damn it!

Back at FBI headquarters, Special Agent Janis is getting harassed by Howell about Agent Walker’s behavior, but Agent Moss tells them to to back off. He’s got a situation here!! Agent Walker’s not picking up her phone, which, in 24-land, is never a good sign. That’s because she’s creeping around the Sangala embassy. Oh, hon. I like you and all, but you know this can’t end well.

The gas isn’t working quickly enough for Emerson’s taste, but Jack refuses to bump up the volume because it will probably kill Natobo. Never fear, though, because Natobo’s wife isn’t handling the gas too well. Natobo thinks they’re going to die in the room together, and tells his wife, “I love you.” Except she makes a grab for the handle that opens the door. Stupid, stupid, stupid. I’m not sure he loves her anymore. Emerson and Co. are waiting outside, guns drawn, and they grab the two. Natobo’s wife is apologizing to her husband, but, seriously lady? I don’t think all the apologizing in the world is gonna make him okay with what you just did.

Jack gets a little frisky with Agent Walker (He’s just looking for her gun! Easy there.) and whispers sweet nothings about shutting her up in her ear. Honestly, the unresolved sexual tension between Bauer and Walker is the best I’ve seen on this show in a while. Bravo. In the Totally Inconspicuous Bright Yellow Van of Chaos, Emerson’s informing Nichols (Jon Voight’s underling) that they’ve got Natobo, except there’s the teeeeny problem that someone in the FBI knew about the operation. BUT, they’ve got Agent Walker. That’s good, right? Meanwhile, Agent Walker’s still metaphorically spitting in Jack’s face and Jack takes it because he knows he’s gonna save her ass again. Tony looks on grimly.

Speaking of Madame President, we join her in the Oval Office, where she’s still debating whether or not to send forces into Sangala. She’s all ready to authorize the military strike, but her Chief of Staff points out she took an oath to protect the people of this country. Except the stand against genocide has reestablished the United States’ leadership and moral authority on the world stage, and Madame President doesn’t want to lose that. Oooooh. Buuuuurn. The Secretary of State barges in and informs Madame President of Natobo’s kidnapping, dropping Jack’s and Tony’s names in the process. They are so screwed. So now Dubaku has the CIP device AND Natobo. Crap. The invasion is now up in the air because there’s no one to take over the Sangala government after the military strike. Madame President still has 30 minutes before the deadline, and the FBI had better find Natobo before then.

Meanwhile, in ANOTHER subplot I don’t care about, Special Agent Sean apologizes for being a jerk to fellow office-mate Erika. They’ve been having an affair. ZOMG! Or not. She’d better be a mole, or something. I need more Jack Bauer, damn it! Where’s Jack??

In other news, the FBI is sweeping the Natobo residence, but coming up empty. Agent Moss is stressed that his Not!Girlfriend has been abducted.

Jack’s back! Yay! Yelling at the TV really does work. Back in the Totally Inconspicuous Bright Yellow Van of Chaos, Agent Walker apologizes for being unable to protect Natobo. Jack feels guilty when Walker goes after him about “killing innocent Americans,” but Tony tells her to shut up. You tell ‘er, Tony! Hee. God, I missed him. And there’s not nearly enough of him in this episode. Emerson gets a call from Nichols, confirming that Walker broke Ventilator Guy, and learned no other information that could compromise them. “Kill her before you get here,” Nichols tells Emerson. Agent Walker goes, “Eeep!” They’re going to dump her body at a construction site and then deliver Natobo to Nichols.

The FBI’s still scrambling to find Agent Walker. Meanwhile, Dubako’s thinking Madame President is being really stubborn about this whole “remove American troops” thing, and is getting to the point where he’s ready to use the CIP device again.

Howell’s still bugging people at FBI about Agent Walker’s interrogation tactics (except she’s MISSING so just DROP IT – jeeze) and Special Agent Janis ain’t feelin’ too comfortable about it. Agent Moss has to run off when Special Agent Janis intercepts one of Emerson’s phone calls, the one that indicated Agent Walker was going to be disposed of somewhere in the D.C. metro area. He must save his Not!Girlfriend so she’ll realize her love for him and he’ll whisk her off her feet to elope in Tahiti!

The Totally Inconspicuous Bright Yellow Van of Chaos pulls up to a construction site and Jack’s instructed to shoot Agent Walker. He wrestles her outside the van, but she ain’t goin’ easy. “You can either walk or I can drag you,” Jack says. “I’m not gonna beg for my life, Jack,” she grits, “So everything you told me was a lie… you’re a betrayer and a murderer.” Ouch. She won’t turn around, so Jack puts her in her place before whispering in her ear, “If you trust me, I’ll get you through this alive.” I told you he’s save your butt, Walker! Jeeze. He shoves her down on her knees, raises the gun, and fires. BAM. Except Jack Bauer is such a tough guy the bullet only grazes her neck, eliciting a gratuitous blood spatter as she falls to the ground. Nice one, Jack! Emerson is pleased. Jack covers Agent Walker’s Not!Dead corpse with a piece of plastic before heading back to the Totally Inconspicuous Bright Yellow Van of Chaos. Tony gives him the Evil Eye and Emerson tells Jack to bury the body. Uh oh! We didn’t account for that, did we Jack? He and Tony grab shovels and start heaping dirt on Agent Walker’s Not!Dead body. That’s gotta be uncomfortable. Shovelful after shovelful lands on her head for, like, five minutes. Finally, with a regretful look on his face, Jack tosses the last chunk of dirt over Agent Walker’s face and it would appear that Dear Agent Walker is going to suffocate to death in a matter of minutes. The clock counts down silently to 1:00pm silently, which is not a good sign. No sireee. DUN DUN DUN!

Next week: Mayhem! Murder! Knives! Something major explodes and he threatens to kill another ten thousand Americans! Emerson gets in a Mexican Standoff involving Tony and a gun pointed at Jack Bauer’s head! Noooo! Let’s hope it’s a bit more adrenaline-pumping than tonight’s series of events. Comments and feedback are appreciated! 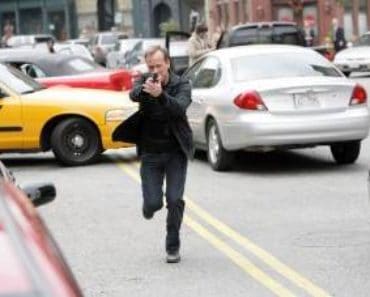