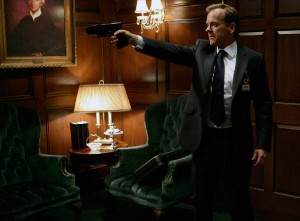 Last week on 24: A Bauer-induced car accident left Marika dead and Dubaku mostly dead. After rooting around in Dubaku’s ribcage, as that is where all sensitive information should be stored, Jack found a thumb-drive with the names of Dubaku’s conspirators. Special Agent Sean was revealed to be Sean the MOLE and he killed his co-conspirator, Erika, before getting his ass busted by Moss. Jack and Walker got into an emotional slap-fest. Bill convinced Madame President to talk to the Villainous Senator Mayer on Jack’s behalf. And THEN we found out that the mysterious Mr. Burnett was actually Senator Mayer’s Chief of Staff. OH! AND THEN Tony revealed that there’s going to be an imminent attack on Washington D.C. Phew! It was packed with goodies. But you know what? Tonight’s two hour extravaboganza is even better. I’m starting to think that “24” is one of the few shows that actually benefited from the strike, because their post-strike episodes have been tightly written, well-paced, and crammed with twists. Good stuff, folks.

This week, we open on the ICU, where Dubaku’s FBI babysitters are STUPIDLY letting in a laundry guy, who must be eeeevil or else we wouldn’t give a damn about the fact that he’s bringing fresh linens to the mangled terrorist mastermind. The phone rings, and Dubaku’s nurse gets distracted long enough for Laundry Guy to inject a clear syringe into Dubaku’s arm. Dubaku starts convulsing.

Meanwhile, Madame President watches her troops waltz through Sangala on CNN (for that is where all American Presidents get their military intelligence). On a Bin Laden-esque tape, General Juma promises the Sangalese people that the American warships will be driven out. The White House doesn’t know where Juma is at the moment, and it’s likely he’s fled Sangala. Madame President stresses how important it is that Juma be captured, tried, and convicted of his crimes against humanity. “Find him, Admiral Smith,” Madame President orders, “Wherever he is.”

And lo, how convenient. General Juma just happens to be enjoying a beautiful view of the Lincoln Memorial and Washington Monument from across the Potomac. Whoops? Juma eeeevilly chats with a young Sangalese soldier, Dubaku’s son, about readying the troops (they’re afraid, so they’ll fight well, blah blah). Dubaku Jr. asks where Daddy is and Juma assures he’ll be there. Except…

… Dubaku’s currently flat-lining in ICU. Laundry Guy calls Juma to confirm that Dubaku’s dead. Juma gives the stereotypical villainous speech about how they have to make sure Dubaku Jr. never finds out about what a coward his father was, etc. and, really? All this mustache twirling is getting rather tedious. Make with the explosions and gunfire!!

Walker runs in to find Dubaku unresponsive to the crash cart. The doctor says Dubaku had a massive heart attack, which could have been the result of a preexisting condition, but Walker doesn’t look convinced.

Moss is briefing the troops about arresting Dubaku’s conspirators while Chloe types away in the conference room. Jack calls and tells her to delete Burnett’s name from the list because OMG ANOTHER TERRORIST ATTACK. If the FBI starts to move in on Burnett, he’ll “lawyer up” (hee) and they’ll never get the intel they need. Tony’s driving Jack to the White House to be debriefed by Bill, and Jack will take care of Burnett then. Chloe reluctantly takes Burnett’s name off the list as Janis bursts in and chatters annoyingly.

Tony pulls the SUV to a stop in front of the White House and asks Jack if he wants to consider bringing Bill in on his little Plan o’ Torture. Jack says, “I’m drivin’ off a cliff here, Tony, and I don’t want to put Bill in the passenger seat,” referring, of course to TORTURE. Tony volunteers to go with him, but he can’t because Jack needs someone on the outside to save his butt once the White House gets attacked. Oops — spoiler! Actually, Tony’s a wanted felon, so he probably wouldn’t get through the gate. “See you on the other side,” Jack says and scurries out into the night.

Burnett slinks down the hallway of the White House and STUPIDLY calls General Juma to ask if the attack window can be extended. It can’t. Hrm, let’s see: calling an enemy of the United States from inside the White House, where just about anyone could hear you, in order to confirm plans to attack the White House is a) a really good idea, b) an okay idea, c) a really bad idea or, d) WHAT THE HELL ARE YOU THINKING, DUDE?? If you didn’t answer d), you can stop reading right now. No, really. Go.

The Chief of Staff approaches and Burnett has to hang up. The two mosy on over to the Visiting Dignitaries Suite, where Senator Mayer is waiting. The Chief of Staff tries to make small talk over bourbon. “Spare me the Southern Gentleman routine, Ethan. The President didn’t call me up here at the ass end of the day to drink her booze and flip through a briefing book,” Mayer seethes. What?? The guy is complaining about free booze?? That’s just not right. I bet it’s really good bourbon, too. Mayer’s up to speed on everything and he wants to know what it has to do with Jack Bauer. Well, you know what, Mayer? Jack Bauer saved the day. Like he does every season. DEAL WITH IT. Mayer’s not having it, though. “I’ve been after this son of a for years,” Mayer says, “He’s a thug, Ethan. He’s Exhibit A.” If by “A” you mean AWESOME. Ahem. The Chief of Staff takes a mighty big swallow of his bourbon before telling Mayer that Madame President is ready to reverse policy and support Mayer’s amendment to the War Crimes Act if Mayer drops Bauer from the hearings. If he refuses, the President will simply pardon Jack. Mayer starts going off about “streetfights” and the Chief of Staff tells him Madame President will see him in a few minutes. Oops. Guess he can tell her that to her face. 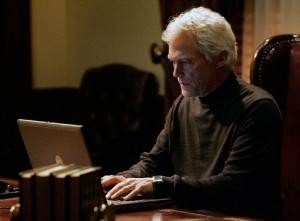 Meanwhile, Jack’s military escort lets him into the room where Bill is typing away on his laptop. As soon as the door closes, Jack elbows the escort in the stomach and KARATE CHOPs him on the back of the neck. Bill’s like “What the Hell?” and Jack pulls the military escort’s sidearm on him. Jack yells at Bill to drop his weapon and Bill compliantly puts his hands up. “Sit down, Bill!” Jack yells at his former boss, leveling the pistol at Bill’s face. Bill takes a seat and Jack demands to know where Burnett is. Bill clams up and Jack tells him that Tony discovered there’s going to be another attack. Burnett knows where the attack will take place, so Bill can either tell Jack where he is or Jack’ll find him himself. Bill can’t, so Jack handcuffs him to the chair. Bill insists that there are other ways to deal with this, but THERE’S NO TIME, DAMN IT. Seriously, I don’t know what it is about Kiefer’s voice here, but it’s all raspy and low and mean and it’s breaking my heart. Jack scurries over to Bill’s laptop and finds that Burnett has been checked into the Visiting Dignitaries Sweet. Bill’s going on about how he spoke to Madame President and she’s gonna intervene with Senator Mayer. “You can get your life back!” Bill insists. Silly. This is Jack’s life. And that’s why we love him. Jack gets back up and positions himself behind Bill. “I’m sorry. Don’t move,” he says as he snakes his arm around Bill’s neck. Bill flails and squirms and gasps and Jack soothes, “It’s all right. Don’t fight it.” Ngggh. Bill finally passes out and Jack double checks his pulse (awww) before moving over to grab the military escort’s taser. He tests it experimentally. “CLICKY CLICKY CLICKY.” Burnett is so screwed.

I have to take a moment here to give kudos to Kiefer and James Morrison for this scene. It tore me apart to watch Jack treat Bill like that, and Morrison’s Kicked Puppy expression made it even worse. And, like I mentioned, Kiefer’s voice wasn’t helping either. The tension and energy in that scene was fantastic, and much of it definitely has to do with the actors. Bravo.

Meanwhile, Moss gets a call from Walker, informing him that Dubaku is dead. She’s also suspicious about Laundry Guy, as she should be. “What if Dubaku knew something and they needed to shut him up?” Walker suggests. “Is this Bauer’s theory too?” Moss asks. “Jack’s not even here. And you know what? I resent that implication,” Walker says. “What implication is that?” Moss asks innocently. “That I’m not the one calling the shots. This has been my investigation from the beginning, not Jack Bauer’s,” Walker fires back. Moss insists he was just asking a question. Walker takes a deep breath and Moss tells her not to worry about Dubaku. He wants her to come in to help with the arrests, but she won’t return until she’s heard back on Laundry Guy. Conveniently, as soon as she hangs up with Moss, a security officer approaches her to give her Laundry Guy’s license plate number.

Back at the FBI field office, Janis barges into Chloe’s workstation and insists she’s found a missing name on Dubaku’s list. Chloe is doing a really poor job of covering herself here, as it’s quite obvious she’s LYING. The two engage in the verbal equivalent of a catfight, and jeeze, these Hacker Warz are a bit lame.

Chloe calls Jack and tells him to get snappy with Burnett — Janis is getting suspicious again. Burnett sends Mayer off to meet with the President (after Mayer decides he’s going to his buddy at the Washington Post in order to make pardoning Jack “as politically toxic as possible for the President” and is likely going to suggest that she’s operating under impaired judgment because she’s a woman [that last part is an editorial comment, but the way Mayer’s comment was phrased came off as a bit sexist. To me.]) and calls Juma to tell him he’ll rendezvous with him at 21:30 (God, I hate it when they do that. 21:30 would be, um… 9:30pm). Jack slides stealthily into the Visiting Dignitaries Suite and goes “CLICKY CLICKY ZAAAAAP” with the taser. Burnett’s body arches and spasms into a chair. “We’re gonna have a talk,” Jack promises and… we go into break. Wheeee!