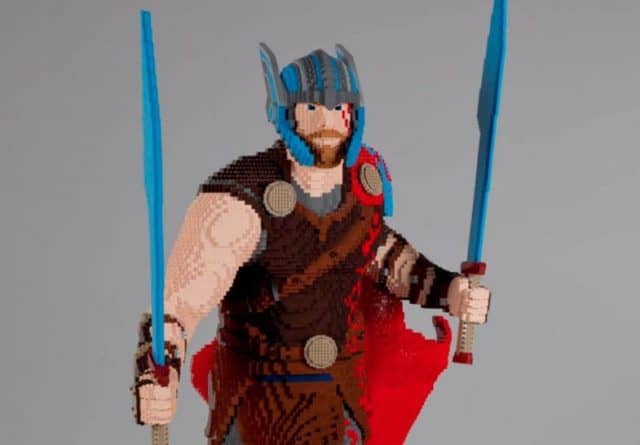 LEGO is without a doubt out to impress with each new sculpture it brings to the table. It’s become such a huge influence in movies, toys, and various other areas of our lives that a lot of us can barely remember a day when we didn’t have a set of small, multi-colored blocks at our ready disposal. Of course what a lot of us put together as kids couldn’t possibly come close to this seriously impressive representation of the thunder god from Norse mythology. Just the pose alone seems to challenge anyone that might come close, daring them to go toe to toe with the Asgardian thunder god.

Just how did this LEGO wonder come to be?

Thousands of blocks and a lot of hot glue.

For those thinking that they could make this same sculpture with just ingenuity and imagination let’s be clear, it won’t happen. Not only would the weight of the bricks make it virtually impossible, but the pose of the sculpture would put way too much weight on the arms and legs of the creation for it to remain stable. On top of gluing several portions together for increased stability, supports and uprights had to be laid first so that the creators could build around them. This gave the structure a much more durable base from which to work and a solid foundation that would hold the weight. Yes, LEGOS can be very heavy when you use thousands of them in a single sculpture.

That’s a little over twelve days spent doing nothing but building this insanely detailed sculpture. Can you imagine 12 days of nothing more than carefully sculpting the thunder god all while paying close attention to the details in his costume? This would take someone that knew how to pay that kind of attention and could bring to life the very attitude and look that Thor will possess in the upcoming movie Ragnarok.

Many pieces had to be built individually.

If you watch the film you can see that a lot of the pieces had to be built separate from the main structure and then attached later. This could have been done to allow the creator to make certain that the structure was completely stable before attaching the necessary pieces. Building the entire thing from the ground up would have likely put too much stress on the whole thing if it was done in one fell swoop.

It was constructed at Comic-Con.

Can you imagine having to cart this sculpture around once it was done? Thankfully when it was done the only real distance they had to go was from the back of the building to the showroom floor. Otherwise this thing would have been in pieces if it had to be loaded and then transported to the convention center. I don’t think anyone would want to tackle that kind of damage control.

It’s a lot of work but the end result is absolutely impressive.