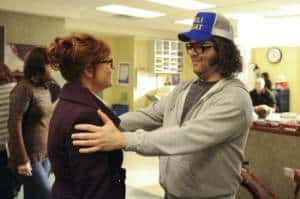 It’s a remarkable thing when a sitcom, lampooning those trainwreck Bravo reality shows, makes up an entirely new vocabulary to describe said shows. The jokes in this week’s episode of 30 Rock, which plays out more like an episode of Queen of Jordan (Tracy’s wife’s reality show on Bravo) reads like a checklist for “Housewife” reality shows to adhere to.

Queen of Jordan cameras invade Rockefeller Plaza, making Jack out to be gay klutz who farts all the time and causes Jenna to ham up her already insane behavior. Liz attempts to manipulate Angie into getting Tracy to return to TGS and Frank reconnects with a teacher he had a love affair with (played by Susan Sarandon) when he was 14.

The reality show vocabulary that 30 Rock establishes will probably provide a blueprint for these shows to follow and inadvertently inspire more of the same. These reality shows aren’t complete without throwing wine, photoshoots for dog funerals, singles called “My Single is Dropping” dropping, Christian illiterates, elderly women who act like they’re 21. As silly as these are, they’re painfully close to the truth.

Despite how entertaining the main plot of the episode was, Susan Sarandon was underused. Not to sound like a total creep (because it’s about a sex offender), but the storyline between her and Frank could’ve been absolutely hilarious had they expanded upon it.

Another slight disappointment was the recycling of a Freaks and Geeks joke. When Jack stands up from a chair, the chair makes a fart sound. He blames the chair, but fails to make the chair produce the same sound. Bill Haverchuck found himself in a very similar situation in Freaks and Geeks. Maybe this was just a tribute to the short-lived masterpiece, but it didn’t feel like it.

Including the minor hiccups, “Queen of Jordan” was the best episode of the season, if not the most memorable.