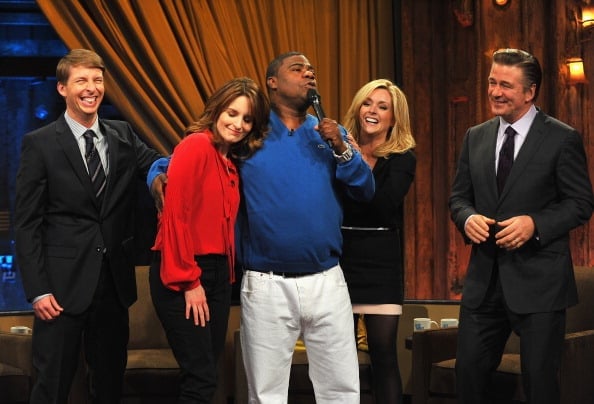 It is hard to believe that it has been almost two years since 30 Rock ended its amazing seven season run on NBC in January 2013. The sitcom, which was created by the very awesome and talented Tina Fey, was a critics favorite and would go on to win 3 Emmys in the category of Outstanding Comedy series before Modern Family would go on to win the coveted award for five straight years. Though it struggled in the ratings, many devoted fans still watch 30 RockÂ in reruns and on DVD.

So what have the actors who played your favorite characters been up to the last two years? We at TV Overmind did some research and found out that they have been very busy in television and film. Here is a look at the projects the 30 Rock cast has been involved with since 2013.

Tina Fey has kept herself pretty busy since ending her 7 year stint as a creator, writer, producer and star on 30 Rock.Â  Fey was able to lend her voice to a 2013 episode of The Simpsons. She played a subsititute teacher that does not like Lisa. That same year, Fey starred in the romantic comedy Admission alongside Paul Rudd and had a brief cameo in Anchorman 2: The Legend Continues. 2014 continued to be a busy year for the 30 Rock cast member. She starred in both Muppets Most Wanted with Ty Burrell and This is Where I Leave You with Jason Bateman and Jane Fonda. Fey’s next TV venture is to serve as Executive Producer and Writer for the NBC comedy Unbreakable Kimmy Schmidt starring The Office alum Ellie Kemper. NBC has high hopes for the comedy considering the peacock network just announced the cancellations of freshmen showsÂ Bad Judge and A to Z. Â Fey has 3 projects slated for 2015 where she will serve as producer and star. One of the films is called The Nest andÂ will also star Amy Poehler. The two will play sisters who throw a party before their parents sell the house they grew up in. Â Fey and Poehler will also be back to host the Golden Globe Awards in January 2015.

Alec Baldwin was a part of the 30 Rock cast from the first season. After an argument with his family went public towards the end of 2007, Baldwin almost left the show. Luckily, he did not. Baldwin would go on to receive 2 Emmy Awards and 3 Golden Globes for playing Jack Donaghy. Baldwin starred in two movies in 2013, after 30 Rock concluded. In 2014, Baldwin starred on an episode of Law & Order: Special Victims UnitÂ and in the films Still Alice (due out early 2015) and Torrente 5. Additionally, Baldwin has six projects that are in the filming process.Â  One of them is Mission: Impossible 5 due out next year and the animated film Boss Baby with Kevin Spacey. Behind the camera, Baldwin produced three documentaries. One was Elaine Stritch: Shoot Me. Stritch starred as Baldwin’s mother on 30 Rock. She passed away in July of this year at the age of 89.

Tracy Morgan was a valuable part of the 30 Rock cast. After the sitcom ended in 2013, Morgan lent his voice to several animated films.Â  He played Luiz in Rio 2, Mr. Gristle in The Boxtrolls, and played Skids on an episode of Mr. Pickles. Jordan will also be starring in the comedy Top Five that is due out this December and will star Chris Rock, Adam Sandler, Rosario Dawson, and Gabrielle Union.Â  In April 2014, Morgan performed his stand-up routine for a one hour special on Comedy Central. In June of 2014, Morgan was involved in a serious car crash that left him in critical condition and killed his mentor: comedy writer James McNair.

Jane Krakowski was not originally intended to be a part of the 30 Rock cast. The character of Jenna Maroney was going to be played by Saturday Night Live veteran Rachel Dratch. After the pilot was shot, Dratch was replaced by Krakowski who received four Emmy nominations for her work on the comedy. Like Fey, Krakowski provided her voice talents to an episode of The Simpsons in 2013. She was also featured on a 2014 episode of American Dad! and Modern Family. Beginning in 2015, Krakowski will be back on television permanently as she is starring in Fey’s new sitcom Unbreakable Kimmy Schmidt.

Jack McBrayer was almost unknown having only starred in minor roles before becoming a part of the 30 Rock cast in 2006. McBrayer has been all over television since the show ended in 2013. He has appeared in two episodes of Bob’s Burgers, five episodes of The Middle as Dr. Ted Goddwin, three episodes of Drunk History, and continues to lend his voice to the character of Irving on the animated show Phineas and Ferb. He has been a part of the show since 2009. It was recently announced that McBrayer will be part of a half-hour comedy with Triumph the Insult Comic Dog.

Scott Adsit has starred in several movies since 30 Rock ended in 2013. He had a small role as a doctor in the hit comedy We’re the Millers that starred Jason Sudeikis and Jennifer Aniston. He will also be voicing a character in the Disney animated film Big Hero 6, which hits theaters this Friday. In 2014, Adsit also appeared on an episode of Inside Amy Schumer. He is currently filming the TV Movie We Hate Paul Revere that will star Ron Livingston.

Judah Friedlander appeared in smaller roles in hit movies like Zoolander and Old School before joining the 30 Rock cast. Since the show has ended, he played Weird Al Yankovic on an 2013 episode of Childrens Hospital and provided his voice to a taxi driver for the animated film Epic. This year, Friedlander played Anthony in Sharknado 2: The Second One and will star in the 2015 Television Movie Bordertown with Hank Azaria and Alex Borstein.

Which 30 Rock cast member’s upcoming project are you most excited for? Let us know in the comments section below.