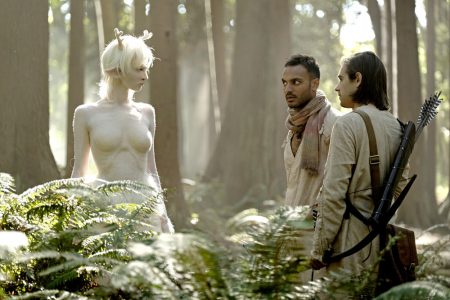 What an excellent episode of The Magicians. “The Flying Forest” may be my favorite episode of season two so far. While I usually dislike time jumps, this episode covered so many important plot points after the tragic loss of Alice last week.

Elliot finally begins to deal with his problems! Last season, after his short-lived romance and betrayal, Elliot was really messed up. It seemed like the writers thought sticking him in Fillory forever would make his problems disappear. That’s not how problems work.

Margo helps Elliot create a clone that can travel back to Earth. Elliot discovers that his problems are still present, despite being the ruler of an entire land. He reaches out to the Dean for help. I am so happy the writers decided to give Elliot some sense to look for help from a more experienced magician. The Dean offers to help him in any way he can, and Elliot is happy. I hope he gets more opportunities to be happy this season.

In the same theme of our male heroes dealing with their problems, we have Penny and Quentin. The time jump is solely because Quentin has been in a coma for three weeks, which only proves that he is still the main character. He’s distraught about Alice, and at first Penny tells him that he’s sorry for what happened to her, but the conversation is awkward and unfeeling. Quentin would rather wallow alone.

Eventually, Penny reaches out to Q to chop off his cursed hands. “I don’t really love blood,” me too, Quentin. After that, they decide to look for a mystical White Lady, who grants wishes. In the most hilarious scene of the season, they end up in “The Flying Forest” which does not include flying trees. Instead, the forest makes them high, and they walk around in circles for what could be forever.

This scene is a great metaphor for not confronting issues in life. Penny and Quentin continue to the right because the path is clearly there. It’s only when Quentin turns left and gets out of the forest clouding his mind that he can really feel.

Quentin breaks down about Alice, and this time, Penny offers more support. I loved this, these guys are friends but they don’t know how to comfort one another and are obviously uncomfortable with the idea of it. This is a theme we need more of on television.

The White Lady is less majestic and more like a snobby teenager. “Duh, you turd,” I love her! Unfortunately, she tells Quentin she cannot bring Alice back, and instead grants him his wish to go back home. She also grants Penny’s wish for new hands, which seems painful.

Finally, an amazing performance by Kacey Rohl as Marina, back from the dead. A reunited Katie and Julia bring her back to find out how to kill the demon Raynard. The scene is terrifying, with Marina screaming “I don’t want to go back.” Honestly, her acting was so amazing, and I’m sad that she may stay dead. Bring Marina back permanently!

Some other notes from this amazing episode:

The centaurs behaving more like horses than humans made me laugh. I also love that they put one in a scene with Penny, who is the most cynical of the group. “Those are the most accursed things I’ve ever smelled,” who knew a curse could smell.

I see what the river guy meant by the role that Penny will have serving the kings and queens. Penny instructs Q on how to do spells. Nice foreshadowing.

Favorite line of the episode: “Where are my stuff touchers?” from a high Penny.

Honorable mention from the Dean: “Proving once again that tragedy and comedy can exist in the same GD sentence.”

Who could forget when Elliot called Margo “Fillory Clinton.”