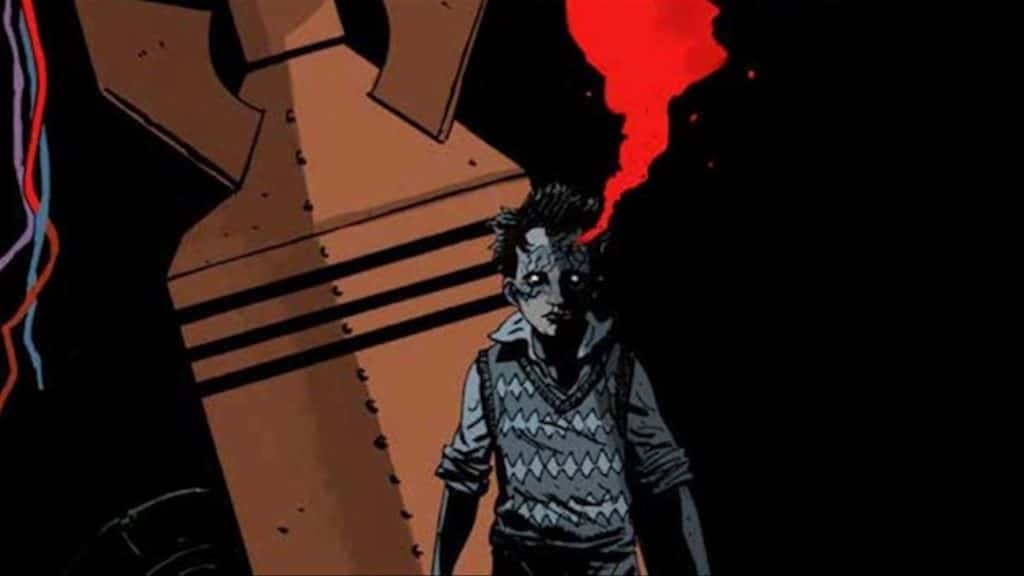 For as often as ghost stories simply do not work as intended, I’ve talked about quite a lot of them in this review series.  In fact, the first one that I covered was another Guillermo del Toro film, his 2015 feature Crimson Peak, which succinctly laid out in its first few minutes why, exactly ghosts have failed to catch on in a big way among American filmmakers (in the same way that something like slashers or zombies definitely have over the years).  Rather than offering up something physical for human characters to fight (and presumably defeat), ghosts serve an entirely different role altogether.  Rather than being traditional antagonists, ghosts act as “a conduit, a pretext to talk about spirituality.  The ghost acts as a metaphor.”

So too is the specter at the heart of The Devil’s Backbone more metaphor than outright monster: more of a ghostly reminder than a ghastly revenant.  In his short-lived exile from Hollywood following the disastrous reception of Mimic (1997) – which, honestly, is actually pretty fun if you get the director’s cut and decidedly not del Toro’s cross to bear when you consider the heavy-handed interference from the Weinsteins on that particular project – del Toro returned to Mexico and gave us what are absolutely the best movies of his career.  But before the fan-favorite, the gorgeously grotesque Pan’s Labyrinth (2006), del Toro delivered what I consider to be his true masterpiece: a dark campfire story of profound sadness that lingers on the pallet long after the flames have been put out and all you are left with is darkness and memory until the distant dawn comes to relieve you: The Devil’s Backbone. 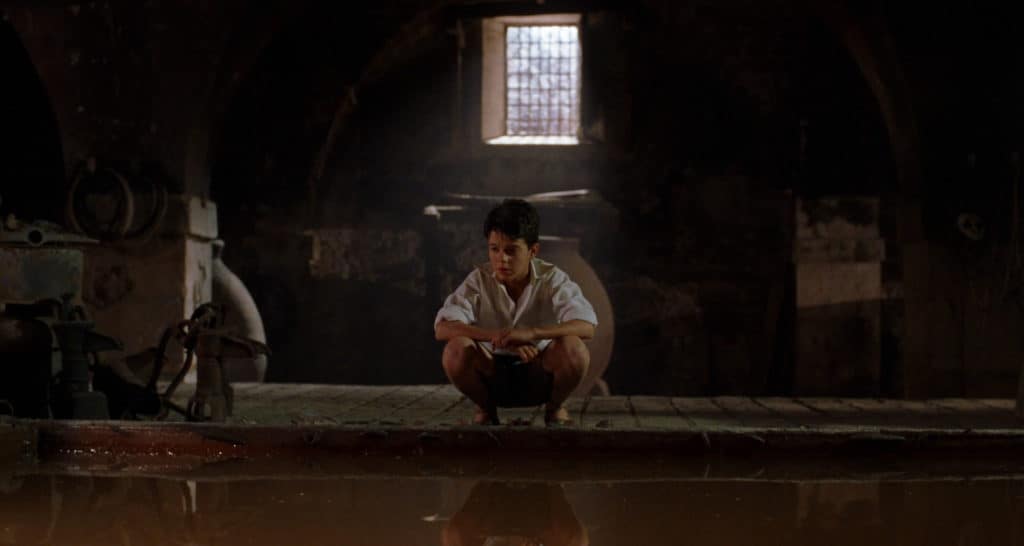 Set during the final years of the Spanish Civil War (something that del Toro would return to again in later films), the film follows the adults and children who live and work in a bombed-out orphanage that has become the target of both sides in the conflict raging throughout the country due to Republican loyalists hiding a massive cache of gold within its walls.  When a new boy is admitted into the home, he soon leans that the grounds are haunted by the dispossessed soul of a young boy named Santi who went missing the day that an undetonated bomb fell in the orphanage’s courtyard.  Soon visited by Santi in the night, the truth about the boy’s death begins to unravel as a desperate retinue of Franco troops close in on the compound.

As soon as the film begins and we are entreated to the very real terrors of warfare from the perspective of the innocence so often caught in its crosshairs, it becomes readily apparent that this is not the director that we had seen in Hollywood years before.  There are traces of the man who made Cronos (1993) and Mimic, to be sure, but only just that: a passing resemblance of a young filmmaker who has now fully grown into his talents and powers as a filmmaker.  The del Toro we see here is far more confident than the one that we last saw tentatively probing the corners of the vampire mythos or learning how to find the humanity in oversized insects.  Assisted by the invisible hand of Spanish producer Pedro Almodovar, this del Toro has a tremendous lot on his mind, and is desperate to get every last idea out onto the screen for us to see. 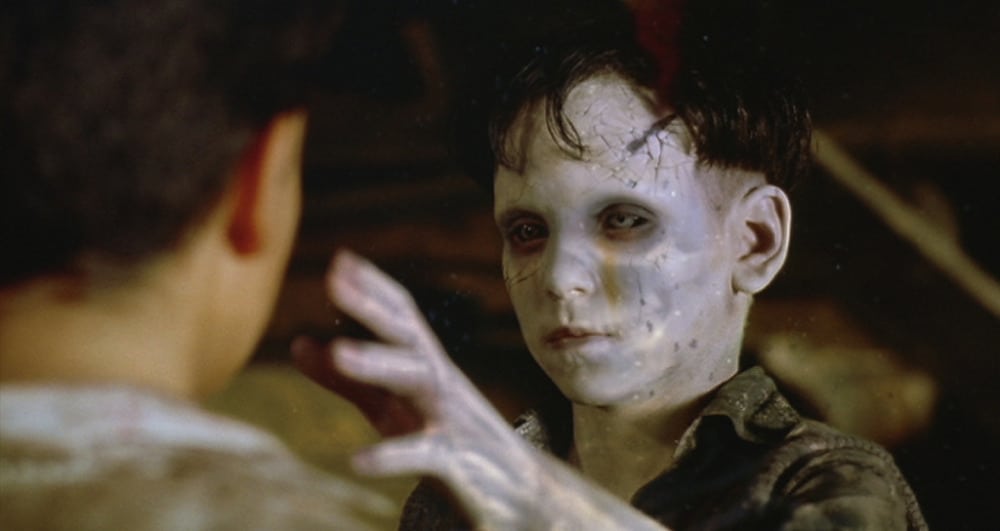 To say that this movie acts as a prototype for what he would later accomplish in Pan’s Labyrinth, while true, is nevertheless disingenuous to what this film is trying to accomplish.  Certainly, both are stories of the Spanish Civil War told from the perspective of children and through a lens of the fantastical, but whereas Pan’s Labyrinth was an escape (both literal and metaphoric) of those horrors via a prism of dark fantasy, The Devil’s Backbone uses its outright horrific elements to further probe and map the contours of war and the violence done against children.

As ever, del Toro’s sympathies rest squarely with the film’s ostensible monster: the ghostly Santi who nightly haunts the compound where he died, a gravity-defying trickle of blood oozing from his head where the fatal blow was struck.  But despite his ghastly appearance, it’s soon apparent that we actually have nothing to fear from Santi.  He is, after all, a metaphor: a transparent reminder of the horrors of war and the imminent threat of death, just as the de-activated bomb in the orphanage’s courtyard.  Neither will hurt us, but both evoke a deep-seeded sense of unease, like an explosive force just waiting to go off. 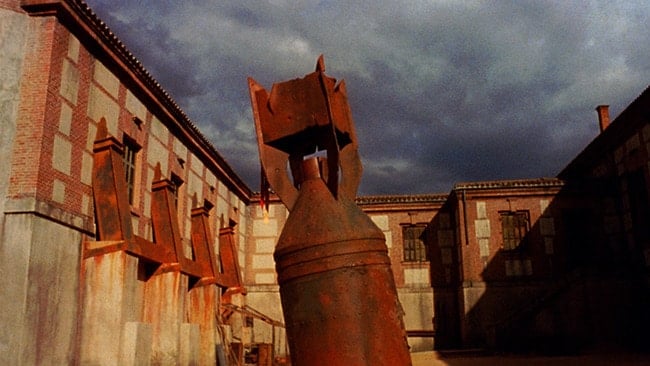 While Pan’s Labyrinth is a lush, breathtakingly beautiful film, overflowing with grim and fanciful set-pieces, The Devil’s Backbone is harsh, barren and altogether desolate.  It is not a beautiful film to look at because what it depicts is just as horrific as its setting.  There are flittering moments of color, to be sure – silvery moonlight bearing down on whitewashed specters with crimson trails wafting in the air above him – but these are not the deeply-saturated hues and rich pallets that del Toro would later grow so fond of utilizing.  These are the subdued shades of a Chinese inkwash painter: subtly colored landscapes that are occasionally splashed with a jarring, deliberative color.  Del Toro doesn’t want us to escape into this world, but rather see it for the unremittingly harsh existence that it truly is.  Rather, he wants us to escape from it.

It’s a slight distinction, to be sure, but it makes all the difference.  Rather than a stepping stone to bigger and better things, The Devil’s Backbone is the ur-text from which his later career would ultimately stem from, varyingly recombinated into more narrowly rendered concepts and characters so as to be more fully explored in their more modest ambitions.  This, here, is the broad sum of del Toro’s passions and obsessions as an artist: a Guernican abstraction of sympathetic monsters, sinister men and those of us unfortunate enough to be caught somewhere inbetween them.