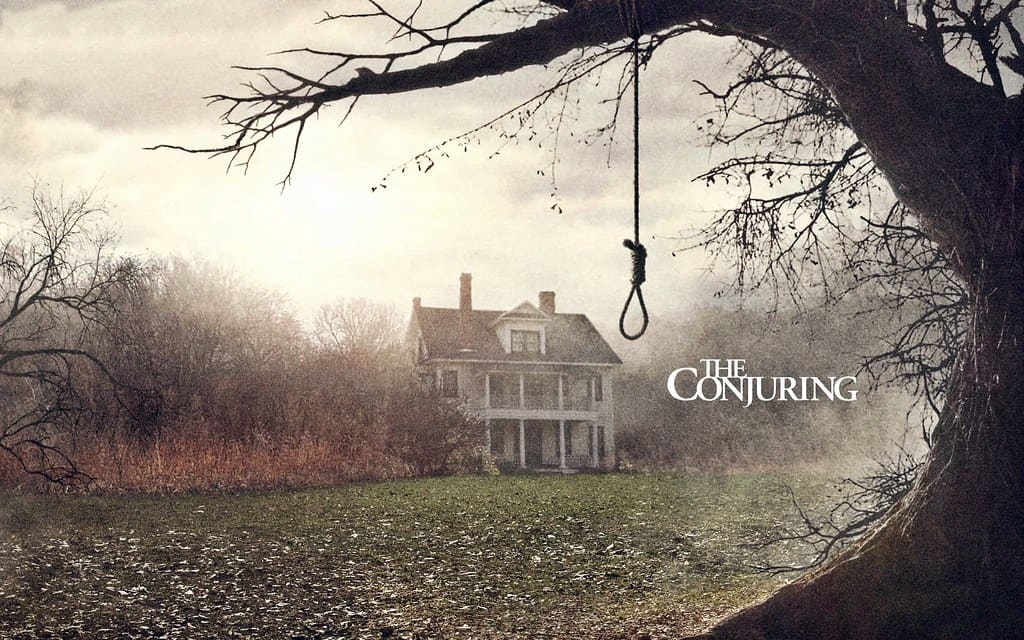 As much as it is kind of mortifying to admit, this isn’t my first time writing about James Wan’s haunted house horror movie The Conjuring (2013).  Before it spanned a sprawling cinematic universe with an increasingly dodgy assortment of prequels and spin-offs, I covered the first one when I first started to write about films professionally (then for Unrealitymag.com).  And looking back, it’s kind of remarkable to me that I got anywhere in this business at all (I mean, for as much as I’ve gotten anywhere in the intervening six years).  The analysis is flatter, the prose is duller and I keep misattributing the film to Blumhouse instead of Warner Bros.  It’s all rather mortifying, truth be told, even if I still agree with the heart of that review (that the movie is really, really good).

It’s actually kind of telling that I keep mistakenly saying that Blumhouse produced the movie.  If you look back at the history of horror cinema, it becomes rather apparent that the genre peaks when the economy is in a downswing and recedes as a pressing cultural force when the economy recovers.  So whereas the Great Depression gave us the Universal Monster movies (by all accounts, still the go-to depictions of the classic movie monsters), the wartime and post-war boom of the 1940s and 1950s gave us dreck like Abbot and Costello Meet Frankenstein (1948) and Billy the Kid Versus Dracula (1966); the post-Studio Era turmoil and recession of the 1970s gave us movies like The Exorcist (1973) and Halloween (1978), while the fallow period of the 1990s gave us some fun-yet-forgettable fair like Urban Legend (1998) and the remake of House on Haunted Hill (1999).  This even holds true internationally, with German Expressionism in the 1920s and J-Horror in the 1990s each emerging from depressive episodes in their respective countries.  Things started picking up again for the genre after the national tragedy of 9/11 (with movies like 28 Days Later (2001) in Britain, The Host (2006) in South Korea, Pan’s Labyrinth (2006) in Mexico, Frontier(s) (2007) in France, [REC] (2007) in Spain, Let the Right One In (2008) in Sweden and Antichrist (2009) in Denmark, but recovery was somewhat slower in the United States (which spent that decade either diving headlong into the post-28 Days Later “fast zombie” revival, wallowing in xenophobic “torture porn” or relying on foreign directors like Alexandre Aja and Takashi Shimizu to deliver solid scares).

In the wake of the Subprime Mortgage Crisis, however, Blumhouse had already established itself as THE go-to brand in American horror.  Having already given us the first four Paranormal Activity movies (2007-2012), the first two Insidious movies (2010-2013), Sinister (2012), The Lords of Salem (2012) and The Purge (2013), they had proven that there was a heretofore untapped vein of distinctly American-branded horror that was just waiting for talented filmmakers to uncover.  And when The Conjuring swept in that summer and delivered the biggest screams of all of them (with many of the same principle actors that Blumhouse used time and time again), I dumbly assumed that it was the horror studio par excellence striking it hot once again.

Cloaked even more dubiously than usual in being supposedly “based on a true story,” The Conjuring follows husband-wife demonologist duo Ed and Loraine Warren (Patrick Wilson and Vera Farmiga) on their latest spiritual mission: investigating and exorcising the malevolent forces terrorizing the Perron family that has newly moved into an idyllic country farmhouse.  Haunted by dark events in their own past (to say nothing of their menagerie of possessed memorabilia locked away in their own home), the Warrens must seek to uncover the truth of the Perron poltergeist before it consumes them body and soul. 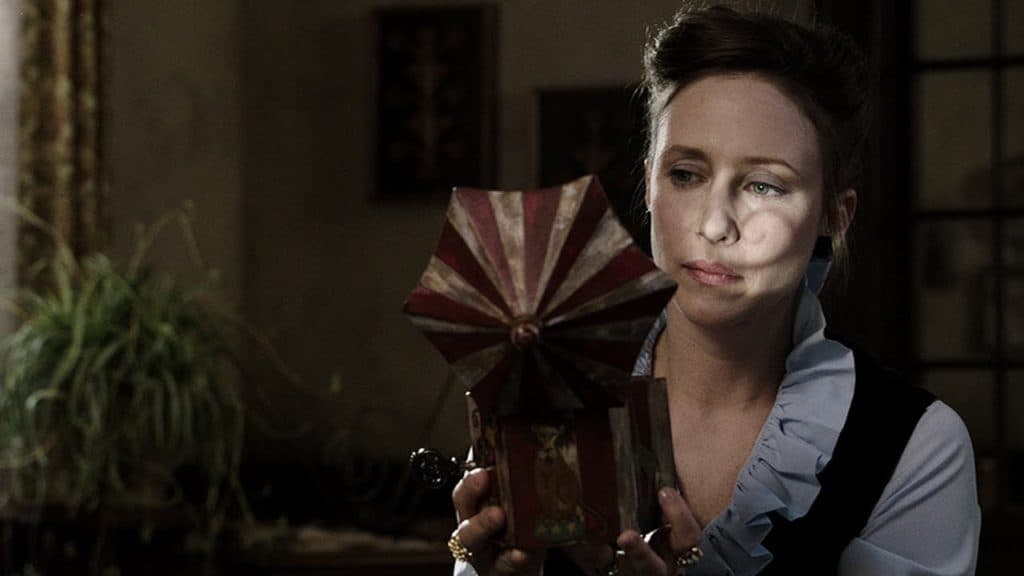 In the seven years since it was unfurled onto an unsuspecting (but certainly eager) public, I think that much of the record has been set straight about the Warrens.  Even as the subjects of a major Hollywood genre feature, the idea that The Conjuring was ever based on anything factual was patently absurd.  The Warrens are well-documented con artists that even other well-meaning demonologists and occultists don’t take seriously.  Virtually all of their alleged cases have later been revealed to be elaborate hoaxes.  They are, in short, nothing short of hucksters, but I’d be lying if I didn’t admit that their decades of self-aggrandizing, self-promotion and self-mythologizing hasn’t coalesced into some rather fascinating film fodder: something that is just familiar enough, yet just different enough to satisfy moviegoers that are already familiar with the likes of The Exorcist, The Omen (1976) and The Amityville Horror (1979).

Coupled with that Hollywood-ready premise, there’s just no denying the fact that James Wan is one Hell of a horror director.  Saw (2004) and its ilk are pretty much the only “torture porn” movies that worked in hindsight, and that was in part because of the simple-yet-effective scares of the original film and the needlessly elaborate continuity that sprawled out from it (under Wan’s guidance as a producer).  The two Insidious movies are visually distinct and decidedly old-fashioned films that are, combined, far better than either had the right to be.  And much of the reason why the later Conjuring movies that spun off from this one failed to live up to the originals is because they lacked the same, self-assured vision and analog genre sensibilities that Wan imbued this movie with. 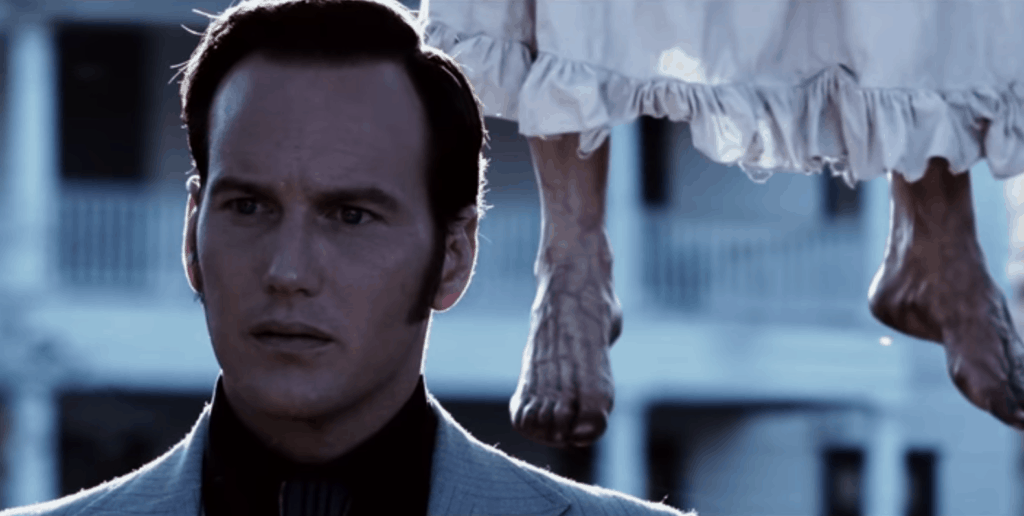 The same could be generally be said of the abilities of Wan’s admirable cast and crew, many of whom, like him, were veterans of Blumhouse’s efficient production model (namely star Patrick Wilson, editor Krik Morri, cinematographer John Leonetti and composer Joseph Bishara).  This, in turn, accounts for the congruous look, feel and sound of this movie to say, something like Insidious.  But whereas Blumhouse is notoriously stingy with their budgets (one reason why nearly all of their films turn some kind of a profit), next to it, The Conjuring’s modest $20 million budget looked like a princely sum, and in the hands of this team of filmmakers, who could certainly milk every dollar’s worth of value from a budget, it’s obvious exactly where every last cent went in the production.

Although needless padded out by the Annabelle Doll’s inclusion – both in an overlong introduction and a second-act climax that seems to suggest that Warner Bros. felt that the film needed to be punched-up for a mainstream release – Wan’s confident approach to the material means that all of the principle characters (both the three Warrens and the seven Perrons) are well-established before anything too intense unfurls and that the scenes are perfectly paced to deliver the expected (yet still altogether shocking) scares at regular intervals.  The Perron’s farmhouse has the same kind of weighty, lived-in essence as Ari Aster’s central home in Hereditary (2018), which gives a sense of groundedness to the otherwise supernatural proceedings.  And even though there seems to be little on the filmmaker’s mind than delivering a handsomely made ghost story, Wan nevertheless succeeds at tapping into the Warren’s varyingly existential and material crises to round out the proceedings.  It is simple, effective storytelling operating on the size, scale and budget that the notoriously inexpensive horror genre rarely is allowed to. 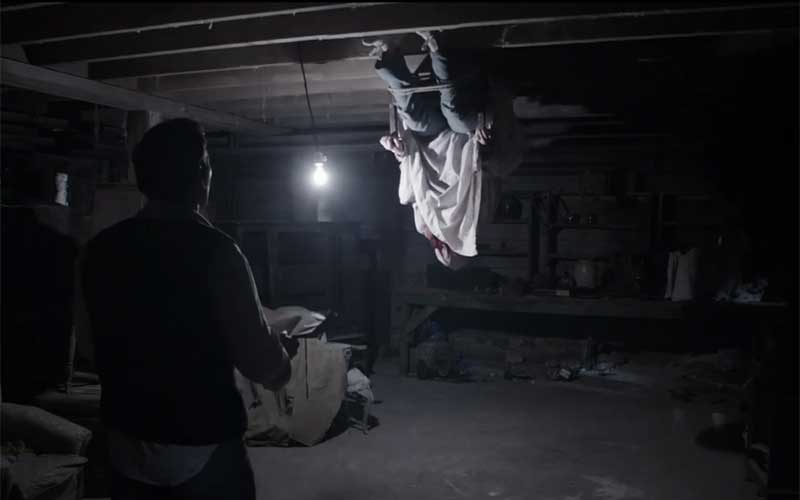 While it’s true that much of that evocative simplicity and “just familiar enough” conceptualization has gotten lost in recent years with all of the Annabelle, Nun and even La Llorona side-series, this first movie is works, beginning to end, with almost perfect, mechanical precision.  The characters are endearing, the space has a kind of tangibility that is rarely seen with these kinds of films and the scares are impeccably constructed.  It’s the perfect successor of the kind of 1970s occult horror from which it liberally draws from, and its later sequels would do well to employ its back-to-basics approach.